As l leafed through the Summit program, I was drawn to the names of Iowa women who are in leadership positions. As I scanned the audience, I couldn’t help but noticed the number of prominent Iowa women in attendance. My thoughts then shifted to the key role women play in the success of any farm business, including Latham Seeds.

Evelyn Latham supported her husband, Willard, and their family-owned business in numerous ways. The family’s kitchen table also served as the company’s office, so she made numerous trips daily from the house to the outbuildings whenever Willard was needed to a phone call.  Known for her cooking skills and hospitality, Evelyn often fed a room full of hired men and customers. In addition to serving as company secretary and caterer in 1947, Evelyn was busy caring for four boys ranging in age from 6 to 1.  The Latham’s fifth son was born in July 1948. She had to have been tired, but I never heard her complain. When she told us stories of the company’s early years, she always had a smile on her face.

“Women have played an important role in Iowa’s history and will continue to be trailblazers who serve as role models for current and future generations of Iowans,” said Iowa Lt. Governor Kim Reynolds as she kicked off her statewide tour during National Women’s History Month.

In honor of Women’s History Month, I decided to feature some women who have taken Iowa agriculture to new levels. Regardless of your party affiliation or your personal beliefs, I hope you’ll agree with me that these women deserve a round of applause for all they’ve accomplished. 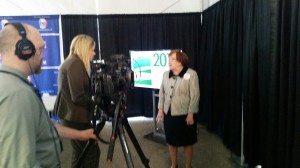 Following her presentation during the Iowa Ag Summit, Patty Judge answers questions from the media

Patty Judge became the first woman elected as Iowa Secretary of Agriculture in 1998 and was re-elected in 2002. During her administration, Iowa’s wine industry began to flourish and Pseudorabies was eradicated from the state’s hog herds. Renewable energy became an integral part of Iowa’s economy, so it’s natural that Judge currently serves as co-chair of the Iowa RFA.

Judge started her career as a registered nurse and as a partner with her husband in a southern Iowa farming operation. She purchased her parents’ real estate business in the 1980s. During the Farm Crisis, she helped hundreds of farm families and their creditors find solutions to financial troubles. Her reputation as a strong advocate for rural families helped Judge win election in 1992 to the Iowa Senate. She was re-elected in 1996 to the Iowa Senate. She served as Lt. Governor from 2007-2011.

Joni Ernst is Iowa’s first female U.S. senator, as well as the first female veteran in the history of the U.S. Senate. She developed a reputation as a “get-the-job-done Iowa farm girl with a conservative edge.” Serving her first term in Congress, Senator Ernst sits on the Armed Services Committee and Homeland Security and Government. She also serves on the Agriculture, Nutrition and Forestry Committee, as well as the Small Business and Entrepreneurship Committee.

Ernst is known for her leadership and commitment to public service. She served in the Iowa Senate where she helped balance the state budget and turn Iowa’s $900 million budget deficit into a $1 billion surplus. She also served as the Montgomery County Auditor. In 2003, she served as a company commander in Kuwait and Iraq where she led 150 Iowa Army National Guardsmen during Operation Iraqi Freedom. She continues to serve as a Lt. Colonel in the Iowa Army National Guard.

Dr. Wendy Wintersteen started working for Iowa State University Extension in January 1979, upon graduating from Kansas State University with a bachelor’s degree in crop protection. Ever since moving to central Iowa from her native Kansas, Wintersteen has served in a variety of positions with ISU Extension and the university.

Since 2006, Wintersteen has served as the Endowed Dean of the College of Agriculture and Life Sciences at Iowa State University and Director of the Iowa Agriculture and Home Economics Experiment Station. In this position, she works with a team of associate deans, department chairs and center directors. She says the best way is when a student shares with her the great experience they had because of a scholarships, an internships or a study abroad opportunity.

Colleagues and associates say Dr. Wintersteen is easy to work with she’s down-to-earth and conscientious. Her employees say she gives good direction. She has always treated me with the utmost respect, even when I was a new college grad and serving as a lobbyist for agribusiness. I often sought her opinion on bills relating to pesticide applications and input on related regulations. Dr. Wintersteen was always gracious with her time and patient with answering my questions.

Savvy women have indeed been blazing trails in Iowa agriculture for decades. The definition of “woman’s work” has evolved over the years as women became more involved in the decision-making process. Today’s most successful female leaders, including Iowa Lt. Governor Kim Reynold who was raised on an Iowa farm, have “walked the walk” and worked their way to the top. They display both book smarts and emotional intelligence. They have a passion. They encourage others, and they will inspire the next generation.

Whether a young girl aspires to farm her own ground like April Hemmes and Steph Essick or run for Iowa Secretary of Agriculture, she has female role models in positions of leadership. She has mentors – and an exciting future filled with opportunities!