Sweeney Takes the Bull by the Horns 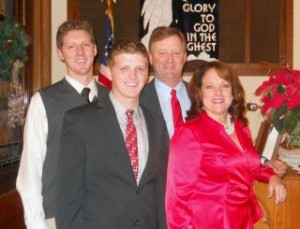 David and Annette Sweeney were married December 1, 1985, during a 26-inch blizzard and at the height of the farm crisis. They weathered these storms and also raised their family in the same house where Annette was raised. Their oldest son, Jim, graduated in December from Iowa State University with a degree in Agricultural Engineering, and this month he began working with Energy Panel Systems in Graetttinger. Their youngest son, Joe, is a member of the 2010-2011 Iowa FFA officer team. He’s a junior at Iowa State University, double-majoring in Agricultural Business and Ag Economics.

“Taking the bull by the horns” is modus operandi for Annette Sweeney, a native of Buckeye, Iowa. This third generation farmer and cattle producer has developed a reputation for researching issues and addressing problems in a straightforward manner. She’s passionate, caring and compassionate to boot. As a result, Annette Sweeney has become one of Iowa agriculture’s biggest advocates.

“Agriculture is truly the backbone of many rural communities, and too many people have the wrong impression of farmers,” says the 56-year-old wife, mother, entrepreneur and former teacher. “I want to provide a voice for agriculture, rural areas and small schools. I also want to make sure decisions are based on science.”

She’s taking her convictions to the Hill. When the Iowa Legislature convenes on Jan. 9, 2012, Rep. Annette Sweeney will resume her duties as chair of the House Agriculture Committee. She says the Legislature’s priorities are jobs and budgets, and she wants to make sure agriculture is at the forefront of those discussions.

“We need to remember that agriculture is a business – a $77 billion dollar business for Iowa. It’s too important to overlook,” says Annette, who learned the business of farming first-hand – literally – through blood and sweat and a few tears.

After the untimely death of her father in 1983, Annette moved from Illinois where she was teaching middle school English and speech/drama, to her native Iowa. She took over the family’s 1,350-acre row crop and purebred Charolais cow/calf operation.

“I put my nose to the grindstone and did everything I could to keep our farm afloat. I was driven to succeed because I didn’t want to have to sell off anything that my family had worked for,” she explains. “My dad didn’t have any life insurance, and at the time of his death, there was no spousal exclusion. The tax burden was horrendous. We had 90 head of seedstock, and the crop needed to get planted. The spring of 1984, I literally grabbed the owner’s manual off the shelf for the planter and headed for the field.”

Fortunately, the determined 26-year-old was blessed by help and counsel from trusted family friends and advisors. Steve Mayo, manager of the elevator at Buckeye, graciously spent three days teaching Annette the basics of grain marketing. Attorney Carl Letz of Eldora spent another week – free of charge – going over tax codes and giving tips. A CPA friend helped Annette understand W2’s and other employment forms. Dr. Gerald McDaniel from Radcliffe didn’t charge to teach her how to vaccinate cattle. In addition, Annette went to school and learned how to AI (artificially inseminate) cows.

With experiences like this, it’s no wonder Annette relates so well with Iowa farmers!

“I’m really enjoying my position as House Ag Chair and the opportunity to meet more farmers across the state,” says Annette, who’s running for re-election in House District 44. “It continues to amaze me how many Iowans have a drive to succeed, not only for themselves, for the benefit of their communities and for their state.”

For updates from the Iowa Statehouse, “like” Rep. Sweeney’s legislative Facebook page. It will help keep you updated on issues affecting the state of Iowa, as well as some issues across the nation as Annette Sweeney is representing Iowa agriculture on the national level.

When her schedule allows, Annette enjoys gathering with family and friends around the kitchen table. The Sweeney family’s favorite meals are beef roast with vegetables or steak on the grill. But in honor of January Soup Month, today Annette shares one of her family’s favorite chowder recipes.