Does Food Come Too Cheaply in America? 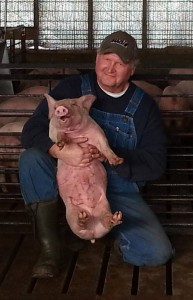 Though Americans are famous for their healthy appetites, their food bill is proportionally low. In fact, Americans spend less for groceries than any other country in the world. The main reason food is so inexpensive here is because U.S. farmers are so productive.

Think of all the agricultural innovations in this country that have allowed 98% of our people to move off the farm and creating all creature comforts we enjoy in this modern age. If 70 or 80% of the populace were still needed to grow food, what would this country look like? Look no further than Uganda, Ukraine or any number of third world countries and you’d have an idea!

Not only do U.S. farmers grow enough food to make the USA the cheapest place to eat, we also grow energy and fiber. Without agriculture, everyone would be naked and hungry. Farming and ranching goes beyond providing food… It also provides more than ¼ of our workforce with steady employment. Twenty-three million jobs are associated with modern day agriculture.

So why is there almost this romantic back-to-nature obsession with organic farming? It all goes back to money. That’s why I’m beginning to wonder if our food in this country has become too cheap. Organic has long since become an ideology… it’s almost as though the food movement become a cult. A reported $63 billion is spent worldwide on organic foods.

There are those in the upper middle class that can obviously afford to pay for organic foods, but what about those who can’t? Think of those with lower incomes and the poor, who can get a lot more nutrients in their body from buying two regular carrots than they can for the price of one organic carrot. This is the type of challenge we face to feed planet that’s population will surge to 9 billion before the middle of the century!

Literally millions of people in poverty are starving to death or have serious health problems, yet some solutions are so simple. Severe Vitamin A deficiency results in blindness, and nearly 50% of the half-million children who are blinded by it die within a year. A new variety of rice can cure many of these problems, yet we’re letting fear of the unknown prohibit us from helping these poor people.

I know most people don’t give a rip whether people are starving in Africa because the American public has become so self-centered with little concern for anyone else. One in six Americans goes to bed, worrying if they’ll have enough to eat tomorrow.

People go hungry because abundant food, which has been proven over and over again to be safe, gets the same old fears thrown at it. There are no real real health benefits to organic and non-GMO foods. Studies prove it. A Stanford study found that organic foods were considerably less likely than conventional foods to have pesticide residues, although organic foods were higher in e. coli. Shouldn’t we be just as concerned by that?

Maybe I’m getting to emotionally involved, but I’m starting to get offended every time GMOs and “normal” agriculture. I’m not even sure what “normal” is anymore! And if I’m getting confused, what about people not involved in farming? 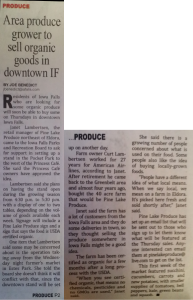 But back to my point… I read an article September 13 in my local newspaper about a local produce company. Locally grown. Certified organic. But the locally producer is quoted as saying, “When you see certified organic, that means no chemicals, no pesticides and no GMOs are used.”

I have a hard time believing this producer can make that statement. Plus, she’s asking for special treatment to be allowed to sell her produce in a city park on Main Street instead of at the local farmer’s market. Maybe my skin is just getting to thin, but I don’t understand why this producer should have special treatment.

As Rob Wallbridge, an organic farmer and consultant based in Western Quebec says, “If we haven’t already, we’re about to split into sects and factions, driven apart by ideological dogmas that have nothing to do with reality.”

Reality is that it’s going to take every farmer to feed the world by 2030. I’m in support of agriculture that improves the quality and quantity of food available throughout the world. Instead of splitting into factions and calling names, why not let the free market – instead of government regulations – decide what people want to buy?