Stand Up for Farming and for Ethanol 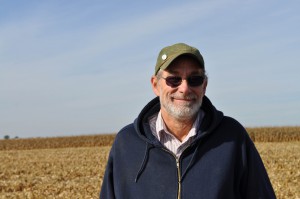 Roger Zylstra has been farming for nearly 40 years, raising corn and soybeans and finishing hogs in Jasper County. He has used conservation tillage and no-till throughout his career and recycles manure into his nutrient management program. Zylstra is currently the president of the Iowa Corn Growers Association and is a graduate of the Iowa Corn Leadership Enhancement and Development (I-LEAD) program. Zylstra and his wife, Carolyn, have three children: Their son, Wesley, is a partner in Zylstra Hillside Pork LLC & farms with his dad.

by Roger Zylstra, president of the Iowa Corn Growers Association

On November 15, the Environmental Protection Agency (EPA) released its proposed renewable volume obligations (RVOs) under the Renewable Fuel Standard (RFS).  Despite its lack of statutory authority to do so, the EPA proposed cutting minimum ethanol use from 14.4 billion gallons to 13.01 billion gallons. If finalized, this cut of 1.39 billion gallons will have economic and environmental consequences felt nationwide.

This is serious – as serious as anything I’ve dealt with in my 30 years of farming. As a corn farmer, I view the ethanol market as a home-grown value added opportunity. As a livestock producer, I know that all of agriculture is connected and better grain prices typically bring better livestock value. I have been to D.C. recently to present verbal comments to the EPA to convey just this message.

In a recent Cedar Rapids Gazette article, Iowa Governor Branstad is quote as saying he believes the EPA is “making a huge mistake” to reduce the renewable fuel standard, which in turn could push the price of corn below the cost of production, drive down farm land prices and cut the demand for farm machinery.

Governor Branstad is right; our farm futures hang in a delicate balance. Corn production is at 14 billion bushels with a 2 billion bushel carryover and corn prices are at cost of production. According to Iowa State economists, the economic impact on Iowa agriculture is projected to be near $1.4 billion.

I see corn not sold sitting in my bins with prices at cost or below the cost of production.  When farmers are squeezed, they aren’t able to spend money. When there isn’t money circulating through local economies, town square businesses close and communities struggle to keep people in town and students in the school. We know what happens in depressed agricultural times because it happened in the 1980s farm crisis. 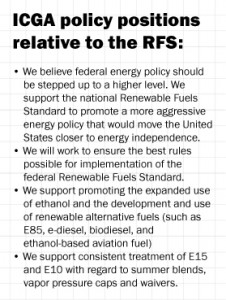 The federal government estimated that farmland values plummeted nearly 60% in the Midwest in just four short years in the mid-80s. In that same time, record production and grain limits brought low prices plus exports decreased more than 20%. I don’t have a crystal ball, but research and some real life 1980s experience, tells me we aren’t nearing a proposed “blend wall” as the EPA proposes, but rather we are sending farmers crashing into a wall by reducing market growth through ethanol production.

Iowa might be miles from Washington D.C., but those miles are covered by many hard working farmers like us who are about to be squeezed by policy limiting our ability to farm today as well as our future ability to produce a crop and make a living.  We have the corn; we have the ethanol plants; and we have the infrastructure in place to help lighten our surmounting energy needs.

The EPA’s attempts to reduce the RVOs for 2014 are misguided.  Please contact the EPA today to tell them how this decision impacts your farm and community. Submit your views to the EPA by clicking on this link or sending your written comments via US mail to: