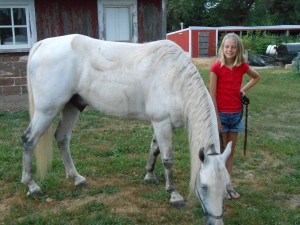 A funny thing happened last Saturday… I bought two, old horses on an auction. While this may not seem odd to most people, I can assure it that’s it’s not a normal thing for an old pig farmer to do!

I grew up on a diversified farm in North Central Iowa. My transportation in the late 1950s and 1960s was a big Thoroughbred horse named Mollie Bee. That horse was so high-strung that she always wanted to run. As a young boy, of course, I was curious to see just how fast she could run. Running along the side of a car, I learned Mollie Bee could maintain 45 mph for a fairly long distance.

The problem with Mollie Bee’s love of speed was that she didn’t slow down for turns. She turned into our neighbor’s driveway at break-neck speed, and it was then I discovered I could fly at an early age – without an airplane. I sailed over a fence along the neighbor’s driveway and landed in the garden! I went 20 years with-out any horses after that.

When my kids and wife decided we have should have some horses, somehow I completely forgot about the flying incident. Fortunately, our horses were slower. We had some mares and colts, but the event that did in was when one of the babies died. None of us could handle seeing such a pretty little animal die.

Well, 20 years went by again and now we’re finding ourselves owning horses again. No more fast horses. No more baby horses. We have two, old geldings. One of these old nags was even named “Grandpa” when we bought him! Needless to say, our grandchildren thought that horse was “just meant to be.” 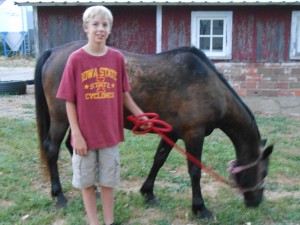 Our grandchildren Darin and Carlie have been out to the farm several times over the last two days to visit “Chip” and “Chester.” They even helped build fence on Monday in the 100° heat. Now we’ll need to do a little tack shopping since I got rid of all the horse equipment we had. Here’s hoping the “third time is a charm” and that we’ll experience a smooth horse ownership this time!