If there is ever an Iowa Hall of Pride for Agriculture, 89-year-old Don Greiman of Garner should be its first inductee. He’s never missed a day of the Iowa State Fair in 49 years! If all goes according to plan, he’ll spend another 11 days at the 2016 Iowa State Fair, giving tours to VIPs like Reba McIntire.

“One of the most memorable experiences I’ve had was getting to meet Reba one-on-one,” he says with his signature grin. “She was the nicest person to visit with and made me feel so at ease.”

Through the years, Don has hosted several grandstand entertainers, presidential candidates and national television broadcasters including Martha Stewart and Fox News’ Ainsley Earhardt. Don recalls the daily livestock shows from memory and can tell you the best places on the grounds to grab a corn dog or ice cream. He also gives behind-the-scenes tours as part of his duties as an Iowa State Fair ambassador, a title he’s held since 2011 after he retired from the fair board.

With so many years of making memories at the fair, former Executive Director of the Blue Ribbon Foundation John Putney suggested to Don that he write a book about it. A Blue Ribbon Life: Memories of the Iowa State Fair was co-written with ISU theater professor Jane Cox.

All proceeds from books sales have – and still do – go toward the Blue Ribbon Foundation. If you love Iowa history, Iowa agriculture and/or the Iowa State Fair, this book is a must read! (It also might make someone a nice Father’s Day gift. Hint. Hint.)

Copies of Don’s book are available online and during the Iowa State Fair. (SIDE BAR: The Blue Ribbon Foundation was very responsive to the email I submitted from its website. When my order didn’t go through, a quick call to the office got it resolved and my book was in the mail within 24 hours.) 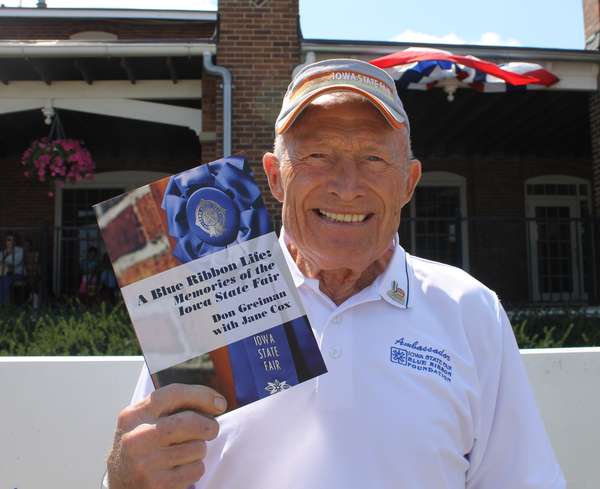 “A Blue Ribbon Life” also chronicles the beginning of the Greiman family’s cattle herd, which is among the oldest purebred Angus herds in America. Don’s grandfather, Fred Greiman, emigrated from Germany and eventually settled in Garner, Iowa. He developed a reputation for raising the finest horses and worked diligently to build his cattle herd.

When delivering Shorthorns to market in Chicago, Fred fell in love with the Angus breed. He wanted to add some to his herd because they had smoother body styles with excellent carcass. Fred decided to sell a rail car full of Shorthorns and use the proceeds to purchase an Angus bull from a sale being held in Chicago on the shores of Lake Michigan.

Those Angus cattle were beautiful but they didn’t come cheap. The opening bid for an Angus yearling bull went for more than Fred’s whole rail car full of cattle brought! Although he didn’t purchase any then, he kept his eyes open for opportunity.

In 1896, Fred was in the train depot when he saw a poster advertising that a South Dakota farmer was interested in trading a Percheron stallion for an Angus bull. The two farmers corresponded by mail. After some months, they agreed to exchange animals. Fred placed his prize-winning Percheron stud on a railcar and eagerly awaited for the arrival of his Angus bull.

“My grandfather couldn’t wait for that bull to come in!” explains Don. “When he went to the train station, he found a ‘wild and wooly’ 400-pound bull calf in a crate. It certainly didn’t look to be a good trade at the time, but that bull ended up paying out. He was crossed with Shorthorns cattle and their offspring was sold at a premium.”

In those days, a farmer would ride the rail with his cattle to Chicago. They’d leave on Saturday afternoon, so the cattle could be fed and watered on Sunday. The sale was then held on Mondays. When Don’s grandpa sold his first crossbred Angus-Shorthorn, he topped the market and was told by the buyer that he’d always be able to merchandise cattle like that…

(There’s more to this story than can be told in just one blog! Be sure to read “Part II” this Friday on TheFieldPosition.com.)