Women Are Changing the Ag Landscape 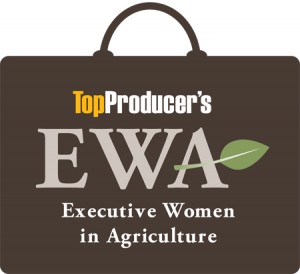 Recently I had the opportunity to spend two, action-packed days attending Top Producer’s Executive Women in Agriculture (EWA) event in Chicago. It was a great opportunity for farm women to connect with others who have similar interests and to also attend many professional development seminars. Hats off to Top Producer magazine and Farm Journal companies for acknowledging – and celebrating – the fact that agriculture is a career path for women!

The definition of “woman’s work” has evolved over the years as women became more involved in the decision-making process. “The percentage of farms now influenced by women is significant,” says Danny Klinefelter, Texas A&M economist and director of The Executive Program for Agricultural Producers (TEPAP). In an article posted by Top Producer editors on agweb.com, Klinefelter said more women than ever are graduating from TEPAP. They’re becoming key decision makers and often the point person for purchasing decisions.

This trend is also apparent at Iowa State University where 47% of the students enrolled within the College of Agriculture are female. Majors most popular among the female students include: Animal Science, Dairy Science and Pre-Vet. Agronomy has risen in popularity and Ag Business remains strong. There also is a high percentage of women enrolled in Ag Education with the communications option. Food Science, Nutritional Science and Dietetics attract a high percentage of female students, as well.

“It’s refreshing to see headway made on dissolving the stereotype that agriculture is a male-dominated industry,” says Mike Gaul, Director of Career Services for the ISU College of Ag. “Subsequent progress is being made to lower the ‘glass ceiling’.”

Corporate America is not alone in recognizing the value of females in agriculture. As more farmers understand how business management relates to production management, Klinefelter says more women are earning business degrees and even MBAs before returning to their family farms.

Women’s roles in agriculture have evolved. During the opening session of EWA, Klinefelter said women involved in farming operations today often have the following responsibilities: