Lately I’ve been reading many articles about the most common food toxins, hormones in our meat supply and nitrates in our drinking water. How much or how little of something in our food or water supply is a big deal!

A hot topic this year has been nitrate removal from drinking water by the Des Moines Waterworks. Bill Stowe, CEO and General Manager, Des Moines Water Works on April 17 said, “The public health of our community is once again at risk.” That sounds especially frightening, but we can’t take water issues at the surface level.

Nitrate levels in the Raccoon and Des Moines rivers have trended upward during the past 40 years, but the data show little or no change from 1984 to 2014. The data actually shows a slight improvement when measuring from 1994 and 2004, which could indicate that conservation practices voluntarily implemented by Iowa farmers are slowing and capture nitrates before they get into streams and rivers.

According to U.S. regulations, nitrates in drinking water must remain below 10 parts per million. Occasionally levels spike above that limit, and the DMWW incurs added costs to remove these nitrates. In a past blog, I did the math. It cost the average consumer of the DMWW less than $10 per year.

But was even that small cost necessary? According to the EU, there can be 15 parts per million with no ill effects. I have also read that for a baby to get Blue Baby Syndrome nitrates must be as high as 200 parts per million. That amount is so minute! As far as I can find, there has not been a case of Blue Baby Syndrome in Iowa without some other source of nitrate contamination! Millions spent, with no proof of the amount in our water causing any problem. It seems size does matter.

Lately I’m seeing food products, especially milk and beef products, being advertised as “no hormones added.” Here again, this type of advertising can be confusing and even scary. After all, who wants to buy food with “added hormones”?! Interestingly enough, many foods naturally contain higher levels of hormones than beef. Again, size does matter! Shown below is a visual comparing hormone levels across various foods. 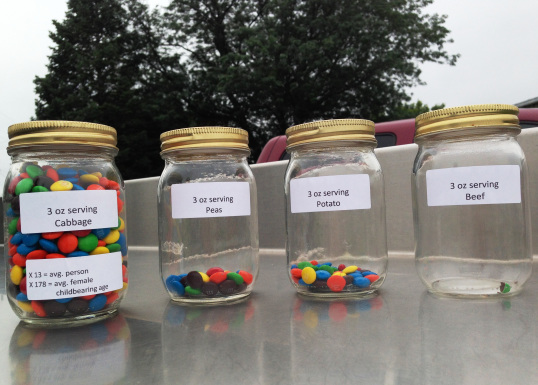 What about “chemicals” in your food? It’s true – your food contains chemicals. (Remember the Periodic Table and how all these chemicals make up our world?) However, not all chemicals are bad. For example, Dr. Julie M. Jones points out that cranberries keep very well in the refrigerator because they have a higher level of (naturally-occurring) benzaldehyde than the FDA allows to be added to food. This is just one example.

Consumers also worry about eating food from plants that have been sprayed with pesticides. It’s very difficult not rely on some kind of pest control. Weeds and bugs do happen! A number of marketing tactics have presented organic fruits to be safer, but that is simply not true. In truth, Best Food Facts points out that BOTH organic and conventional farmers use pesticides on their crops.

“It’s the amount of the chemical rather than the presence or absence that determines the potential for harm,” explains Dr. Carl Winter, PhD, Director, FoodSafe Program, Extension Food Toxicologist at the University of California-Davis. “In the case of pesticide residues on food, we can detect them, but generally at very tiny levels. I think consumers are concerned because they’re aware that these chemicals, which have potential toxic effects, show up on foods. However, the levels at which we detect these pesticides are so low consumers have nothing to worry about.”

Remember, your food choices matter. What – and how much – you eat affects your body mass and health. We need a variety of foods to obtain the nutrients our bodies need. Your body needs a certain amount of fat; the non-fat kick we’ve been on has made our bodies crave other types of food that have contributed to our declining health.

Research believed for the last 30 or 40 years has been proven wrong. In early 2015, it was announced that it’s okay to eat eggs because research “shows no appreciable relationship” between heart disease and how much dietary cholesterol a person eats. And the new proposed dietary guideline that calls for a reduction in red meat consumption really isn’t being pushed is for your health… it’s someone’s agenda to fix something that’s not broke. There is a misperception that beef production isn’t sustainable. Also keep in mind, our First Lady pushed changes to the school lunch program based on bad science!

Let’s get rid of this fear of food. No more food fights! Size matters. Common sense matters. Enjoy your food!