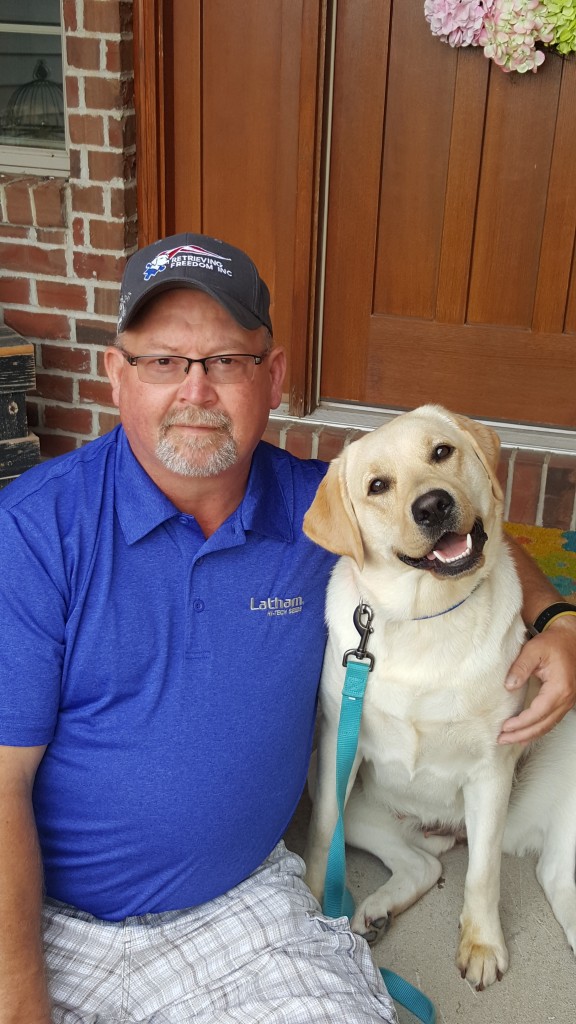 “Bailey is a member of our family,” says Jerry. “Knowing that her offspring will help others is the greatest feeling in the world.”

From the time he was a 4-H member in Muscatine County, Iowa, Jerry Broders has felt compelled to help make his community a better place by getting involved in charitable organizations. The more Jerry learned about Retrieving Freedom Inc., the more he knew he had to get involved with RFI.

Retrieving Freedom spends two years — and approximately $20,000 — training specific dogs to place with disabled veterans and individuals with autism. The organization receives four requests for every dog that has been trained through its program.

“As Americans, we have a duty to help repay and support those who have given so much to our country,” says Jerry. “My wife, Kim, and I decided we wanted to help support RFI’s efforts to provide more dogs for people who need their services.”

Jerry and Kim Broders of DeWitt, Iowa, decided to purchase a breeding female for Retrieving Freedom Inc.’s program because it takes quality dogs to become trained service dogs. These dogs must have the correct temperament, intelligence, confirmation and skills.

The Broders oldest son, Zachary, served in the Army Infantry. Jerry’s niece has a son with autism. Getting involved with RFI is personal to the Broders, but even if you don’t have a direct connection with someone who suffers from PTSD or autism, you can’t help but be touched by the people who are being helped through RFI’s services.

“Some of my son’s fellow soldiers did not come back from Afghanistan, and many of the ones who did come home some have really struggled to return to civilian life,” says Jerry. “There is no greater group in the world than the men and women, who serve and protect our country. Each one has a story to tell and know they serve to protect something that is bigger than just one person or a small group of people. They deserve our support and respect.”

“I’ve seen first-hand the challenges that come with raising an autistic child,” adds Jerry. “I’ve seen the great work that service dogs can do helping these kids and their parents get through each day.  There is a transformation that takes place with the child when paired a service dog that is nothing less than amazing!”

RFI’s service dogs are tailored to meet the precise needs of the person with whom they will be placed, and like any charitable organization, RFI has limited amount of resources available.

“There are so many groups out there looking for funding, so the challenge is finding a group that’s actually living up to its mission statement and not misusing the donations. After I talked with Scott Dewey and saw first-hand how RFI helps our veterans and individuals with autism, I knew my wife and I had to get involved with this project.

You Can Help, Too!

You can get involved on a smaller scale by helping raise funds for RFI by participating in the Latham Freedom of Independence Run.

Latham Hi-Tech Seeds of Alexander, Iowa, will donate the first $5,000 to RFI at its Freedom of Independence Ride around eastern Iowa on Aug. 19, which is being held on a R.E.D. Shirt Friday to “remember everyone deployed.”

One hundred percent of a rider’s registration fees for Latham’s Freedom of Independence Ride will benefit RFI. The $25 per rider registration fee includes two meals plus a commemorative t-shirt and a do-rag. You’ll have a chance to see RFI dogs in training and watch them demonstrate skills. In addition, Nashville-recording artist Neil Hewitt will perform following the ride.

Anyone interested in touring farms and learning about topics like weed management and cover crops is welcome to attend! We’ll be making a couple of fun stops along the way including one at Antique Archeology. Register for the Latham Freedom of Independence Ride today at lathamseeds.com!