America needs farmers. Our infrastructure is key to global commerce. The world needs farmers, who use cutting edge technology to raise a diverse food supply. Why? Because agriculture can help solve the world’s problems in relation to hunger, health issues, and improving the quality of life. 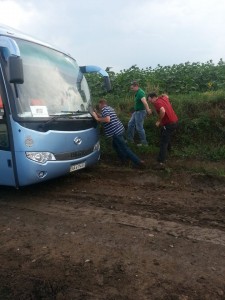 We can learn so much by traveling abroad and meeting with farmers across the world, says Larry Sailer. This photo was taken when he traveled to Ukraine.

I’m getting excited for a trip this week to Japan with the Iowa Farm Bureau! There are so many reasons I’m thrilled to be part of this delegation, but the fact that we have a sister State in Japan makes it even better.

Diplomacy with Japan was strained after World War II, as you can imagine. But in 1959, a typhoon in Yamanashi Prefecture changed the relationship between Iowa and Yamanashi for the better. An Iowa sergeant, who had vacationed in Yamanashi when he was stationed in Japan, heard this disaster had caused heavy damage to agriculture. Sgt. Richard Thomas decided to help, and Iowans did not disappoint! They shipped 35 breeding hogs and 100,000 bushels of corn to the needy state. This act of kindness started our Sister State program.

In 1960, Yamanashi became the first of nine Iowa Sister States around the world. There have been many exchanges between these sister states involving agriculture, education, art, music, sports, medicines and more. The most important exchange, however, is friendship.

Many life-long friendships have formed because of that shipment of pigs to Japan. Yamanashi sent aid to support our state during the great flooding of 1993. Again in 2014, Iowa sent aid to Japan when it suffered from extreme amounts of snow.

I’m going to fly over to Japan and personally research this relationship with Yamanashi Prefecture. I’m hoping to learn more about their culture, food, and maybe even see some pigs! I wonder what breed of swine we sent them… so stay tune. I plan to blog more about what I see and learn about agriculture in Japan.