Breaking Down Walls in China 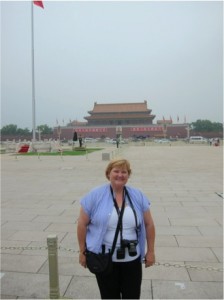 World traveling farmer reporting in to The Field Position! My latest adventure took me to China.

It all started back in January when my husband brought me the Farm Bureau Spokesman and said, “They’re taking a trip to China, and you need to apply for it. All they want you to do is talk about the trip when you get home. I think they would get their money’s worth out of you!”

I applied, never thinking in a million years they would pick me. Then in late February, I got the news that I was one of 18 farmers chosen! The trip was sponsored by Iowa Farm Bureau, and we paid a portion of our own way.

In late June, 11 men, 7 women and 2 Farm Bureau staff members took off for China. We ranged in age from 26 – 74. It was a pretty diverse group, but like I say, when you put a bunch of farmers together you always have a good time. 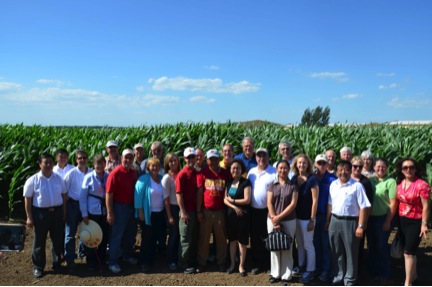 We flew into Beijing with stops at a wholesale produce and a meat market, plus the U.S. Embassy, U.S. Grains Council and Meats Council. Our last day in Beijing started with a meeting at the Ministry of Science and Technology. Teachers and researchers of Agricultural subjects met with us and we spoke about agriculture in China and how they inform farmers of research they have done. The quote I came away with was that they don’t tell farmers what to plant but they “ spare no effort” to suggest what crops would be best for the farmers to plant. I know what I would think if anyone “strongly suggested” what I should plant!

A few take-away from our visit include: 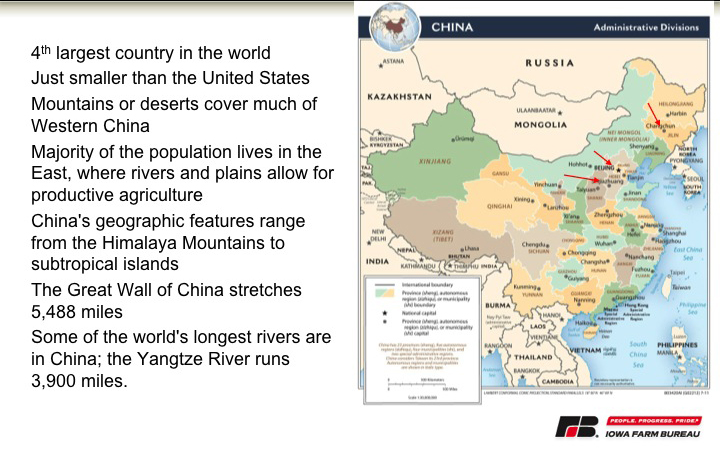 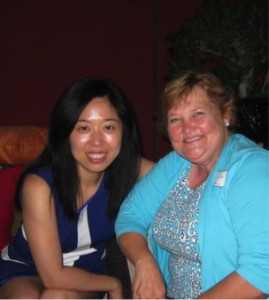 Good to see family that lives far away! With my sister in law
Jackie!

My favorite part of visiting Beijing was getting to see my brother-in-law and sister-in-law! My husbands’ brother, Jim, lives in Beijing and has for 7 years. His wife, Jackie, was born in Shanghai. She went to school at Arizona State University and is now an American citizen. Jackie works in finance and is very involved in a group of women leaders in China. They organized a night where we had a panel of Americans and others doing business in China, telling us what that involved. We also had a panel of women leaders in different areas telling about their experiences and what it was like for women working in China. I was very fortunate to be involved in that panel!

From Beijing, we set off for Heibei Province. Heibei is the sister state to Iowa. Our final destination in the province is Shijiazhuang, which is the sister city of Des Moines. Iowa and Heibei Province have had leaders visiting for over 30 years. The President of China , Xi Jinping, has been to Iowa several times. We were treated like dignitaries here and had several interesting stops including a corn processing plant, dairy and milk processing plant along with the local agriculture college. 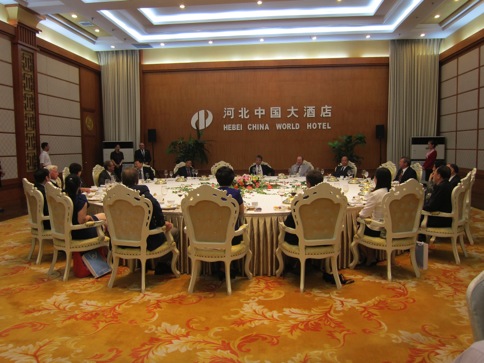 One of our formal dinners in the Sister State of Iowa. Hebei Province.

Our last stop was the province of Jilin. It is in the North East part of China, but it reminded us all of home with a lot of cornfields and a climate much like ours. Local dignitaries met us here, too, and followed us throughout our stay. One of our visits was to a farm where 5 producers went together and farm 1,500 acres.

Remember, each landowner has around a ½ to 1 acre of ground, so they worked with a lot of owners! They also hire 36 employees for the farm. They couldn’t believe it when we said we would have about 2 or three people to work that amount of ground. They still pick in ear corn and store it that way. The government pays them $9.50 a bushel for their corn. This is a communist state, so there is no open market for grain trading. It is $2/bushel cheaper for the livestock feeders there to import corn from America than it is to feed the lower quality corn stored in China.

Because it is a communist state, we only saw what they wanted us to see. No random stops were made along the way. Our group quickly realized that the nature of the trip was a market study tour and had changed to a networking /diplomatic trip. But that was just fine with all of us and we made the best of it.

There was never a dull moment or lack of discussion during our meetings and banquets. As a result of the contact we made, three Chinese groups have contacted the Iowa Farm Bureau about visiting our state! This is great news and makes for a successful trip.

It wasn’t all work on our trip, however. We did some cultural sightseeing: Tiananmen Square, Forbidden City, the Great Wall, Olympic Table Tennis center, ancient monasteries, silk and pearl markets and one of the largest shopping malls in the world. All of which were amazing and wonderful to experience!

It was truly an honor to go on this trip and I would highly recommend anyone to apply for this trip next year. Look in your Farm Bureau Spokesman around January for details. I made life-long friends, not only with the Iowa farmers with whom I shared this wonderful adventure, but in China as well.