Soy Scholars Have a “Sweet Time” Advocating at State Fair 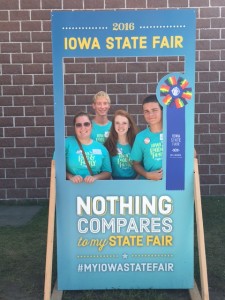 If you’ve ever taken projects to the fair, you know it’s rare to make it past the livestock barn or exhibition hall. There’s probably a few “annual stops” that you make on the fairgrounds to see old friends or make take in a new fair attraction. That’s why the third and final session of the 2016 Soy Scholars program occurred yesterday at the Iowa State Fair to provide a different perspective to students interested in ag careers.

Four Iowa high school students were selected last spring to participate in the inaugural Soy Scholars program, sponsored by the Iowa Soybean Association and Latham Hi-Tech Seeds. The objective of the program is to allow students to explore career paths before they graduate high school or declare a college major.

Visits in June and July to both the Iowa Soybean Association’s office and Latham’s headquarters showcased a wide-array of ag-related careers from agricultural production and marketing communications to seed sales and precision farming. During these sessions, students work directly with a mentor in their field of interest to gain hands-on experience, ask questions and make connections.

Yesterday the Soy Scholars spent time at the state fair, advocating on behalf of the Iowa Food & Family Project of which Latham Seeds is also a proud sponsor. Students worked at stations just outside the 50-ton, 14-feet tall sand sculpture that fairgoers literally watched take shape from the opening day of the fair. 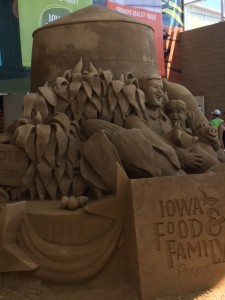 After working their two-hour shift, Soy Scholars were treated to a behind-the-scenes tour by Iowa State Fair ambassador Don Greiman. Don was gracious enough to point drive us around the grounds, providing us with interesting fair facts. Did you know that polled Herefords are the only cattle breed native to Iowa? Beef breed meetings are held inside the Gammon Barn throughout the state fair.

Did you know the Iowa State Fair was the inspiration for three motion pictures plus Rodgers and Hammerstein’s Broadway musical? Midwest Living named the Iowa State Fair one of “Top 30 Things Every Midwesterner Should Experience,” and it’s the only fair listed in The New York Times best-selling travel book, “1000 Places to See before You Die.”

One of the icons at the Iowa State Fair is, of course, the Butter Cow. The butter cow consists of 600 pounds of low moisture, pure cream Iowa butter, which is reused for up to 10 years. (Click here for 25 fun facts about the butter cow.) This year the butter cow had a Star Trek companion to help the television and movie series toast its 50th year.

There’s so much ground to cover at the Iowa State Fair – so much to see and do – that it’s no wonder this event continues to attract media attention and draw record-breaking crowds. The food alone makes it worth the visit! Yesterday the Soy Scholars dined at the Iowa Turkey Federation food stand for turkey drumsticks and “Not Your Mama’s Tacos,” winner of the 2016 Iowa State Fair New Food contest.

The final stop on our fair tour was Nitro Ice Cream from Blue Sky Creamery. Not only is it super smooth, but unlike traditional ice cream that melts faster than you can eat it, Nitro Ice Cream stays firm. We put it to the test as the mercury reached 99 degrees Fahrenheit yesterday on the fairgrounds!

Although many of the notorious state fair foods can only be enjoyed once a year, you can treat yourself to Honey Lemonade all summer long. Today we’re sharing the recipe, courtesy of the Iowa Honey Producers Association. (Click here for tips on keep your honey fresh and for links to additional honey recipes.) 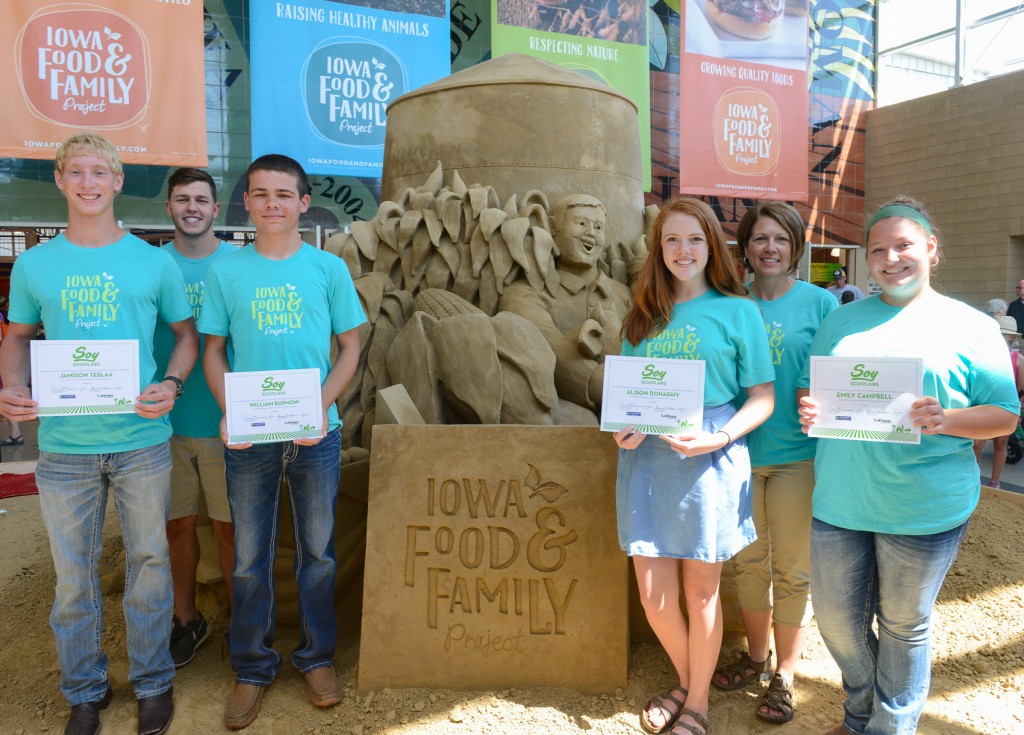 Soy Scholars yesterday were presented with a certificate for completing a three-part agricultural career experience. The third session was held yesterday at the Iowa State Fair where they volunteered at the Iowa Food and Family Project booth in the Varied Industries Building and also were treated to a fair tour by Iowa State Fair Ambassador Don Greiman.
Pictured in the front row, from left to right, are the 2016 Soy Scholars: Jamison TeSlaa of Boyden-Hull High School, Hull; William Rupnow of East Sac High School, Nemaha; Alison Donaghy of Dowling Catholic High School, Des Moines; and Emily Campbell of Audubon High School, Hamlin. Pictured in the back row are sponsors Easton Kuboushek of the Iowa Soybean Association and Shannon Latham of Latham Hi-Tech Seeds.