When I have a lot of windshield time – whether it’s driving to meetings or combining corn – I contemplate all sorts of things.  For example, have you ever wondered about the term “landlord”?

The term dates back to the Roman Empire and feudalism when peasants (or serfs) were bound to the land.  The peasants worked the land and paid homage to their lord; they shared their produce and other fruits of their labor in exchange for military protection.

Fast forward a couple thousand years to the country of Ukraine. The tables have turned during the last 20 years, so now the people who used to be the peasants are the landlords.  When the Soviet Union fell apart, land that has been confiscated by the government was returned to the farm villagers.

Each qualifying person received about three to four hectares, but there was a catch… the villagers could not buy or sell that land! If the owners of the ground cannot sell it, that means they must either farm it themselves or rent it.  This is where the story really gets interesting (IMHO)…

During our Black Sea Study Trip last July with Iowa Farm Bureau, we had an opportunity to visit many farms in the Ukraine.  One particular farmer, Kees Huizinga, stands out in my mind.  His farm operation is called “krychenka.”  He has grown it from scratch to 14,000 hectares, or about 35,000 acres. 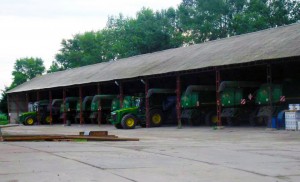 Kees (Case) Huizinga is an investor-owner, operator of “Krychenka”, a 14,000+ hectare farm (35,000 acres). A native of the Netherlands, Kees began farming in the Ukraine about 10 years ago. The initial farming operation had 1,000 hectares. Kees said that when they started farming there the fields were full of weeds that really had not been farmed. They used a moldboard plow to get started and to begin the process of cleaning up the fields and leveling them out.

Now if you’re an old farmer like me, you start doing the math!  Kees has about 4,500 landlords living in about 10 villages, which Kees is now responsible for taking care of.  Not only does Kees need contracts with 4,500 landlords, he must take care of the needs of their villages.  There aren’t any property taxes to fund the schools, supply water, maintain roads or remove snow.  Kees has large equipment, so he’s expected to take care of all these needs!  Basically, he is taxed by the services he must provide.

Can you imagine?  Many Midwest farmers feel that one landlord is one too many!  Imagine having 4,500 landlords who expect you to take care of more than just their farm acres.  As frustrated as I can get with the rules and regulations, I can’t imagine having thousands of landlords.  Hmm…  maybe there are more similarities between the two than I first thought!

For more stories about our trip to the Ukraine, click on the links below: