How Do Eastern European Farms Measure Up? 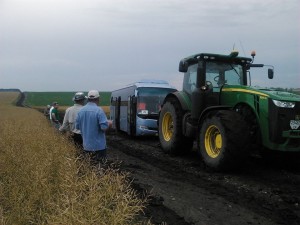 One of the biggest challenges while traveling throughout Eastern Europe was poor road conditions. It wasn’t uncommon for our bus to get stuck.

From June 22 through July 5, I had the opportunity to travel throughout Eastern Europe with a group of 20 Iowa Farm Bureau and staff members on a study trip.  We visited with farmers in the Ukraine’s Black Sea region, which is expected to become a top competitor for Iowa crop exports in coming years.

One of the things I wasn’t prepared for on this trip was the need to convert measurements.  Believe it or not, the European measurements make a lot more sense!  Americans measure liquids as a cup, pint, quart and then gallon.  It can be very confusing unless you memorize the number of ounces in 1 cup (8 ounces equals 1 cup); the number of cups in a pint (2 cups equal 1 pint); the number of pints in a quart (2 pints in 1 quart); and the number of quarts in a gallon (4 quarts in 1 gallon).

Then you calculate weight… Who in the world thought it was a good idea to make an odd number, like 16 ounces, equal a pound?  And why is “lb” the abbreviation for a pound?  Say what?!  Now a ton makes a little more sense to me since it’s the round figure of 2,000 pounds.  Although the metric ton is 2,200 pounds, it doesn’t really matter.  Europeans use kilograms to figure a ton, and this makes even their tonnage easier to calculate.

The next measurement we had to convert while touring farms in the Ukraine was hectares.  Converting hectares into acres is a real brain teaser!  An acre is 43,560 square feet.  Somewhere in history, this was logical.  Why?  Don’t ask me!  I’m not even going to Google it.  After two weeks of doing math, I know that I’d prefer for Americans to use hectares.  Like everything else metric, a hectare can be divided by 10. 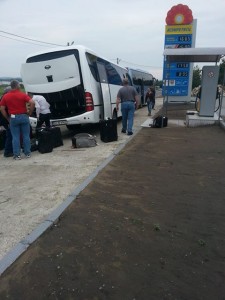 Talk about a travel delay! It took a group of Iowa farmers four hours to travel four miles from Ukraine through Moldova into Romania.

I’d hate to guess how many conversions we made.  A group of 20 Iowa Farm Bureau members asks a lot of questions while touring:  What’s the size of the farm?  (Convert hectares to acres.)  What’s the average yield?  (Yield really takes a bunch of conversions.)  How much herbicide do you apply (Convert from hectares to acres, and then from ounces, pints and gallons to liters per acre.)  Thank goodness there’s an app for that!

Another huge problem we had in the Ukraine was the terrible road conditions.  Iowa’s pot holes are nothing compared to those in the Ukraine.  We soon discovered it wasn’t possible to travel these roads fast enough to keep our schedule, so we coined a phrase: “the Ukrainian 20 minutes.”  This phrase describes a situation that takes much longer than 20 minutes.  But not even “the Ukrainian 20 minutes” described the time it took us to cross through Moldova.  It took more than four hours to move less than four miles – the Moldova minute had no end!  (And, no, we weren’t stuck in mud at the time.  Click here to read Dirck Steimel’s account of that sticky situation.) 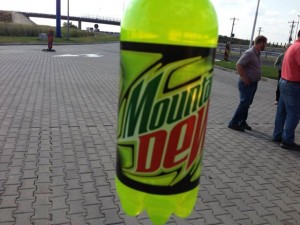 Pepsi products became a unit of measurement for Iowa farmers traveling through the Ukraine, Moldova and Romania.

As we traveled through Moldova, Romania and Ukraine, it became apparent that another unit of measure was in order to simply compare economies of these different areas.  Being the great economist that he is, David Miller again rose to the occasion.  He found a way to explain economies in a scale that all of us could understand…  You see, Dave was always looking for his favorite drink, Diet Mountain Dew.  Pepsi can be found almost anywhere, so it came to signify the “poorest economy” we traveled through.  If Mountain Dew could be purchased in the area, it was referred to as a “civilized economy.”  In the rare place where Dave found a Diet Dew, it was called a “sophisticated region.”  It’s good to know all of those degrees Dave earned are coming in handy! 🙂

On a serious note, I would like to thank David Miller for leading a very successful and informative market study trip to Ukraine and Romania.  No matter the question, Dave had knowledge and understanding of what we wanted to know.  Some answers were as simple as Diet Mountain Dew, and some were as complex as the economy of Ukraine.