While most rural residents enjoy the solitude that comes with living the country life, Eric and Laura Morine found their eastern Iowa farm a little too quiet after their two daughters graduated from high school.  The couple met when they were both majoring in Agriculture at Iowa State University.  While raising crops, livestock and a family, plus managing a seed dealership, there was always something to do or someplace to go. 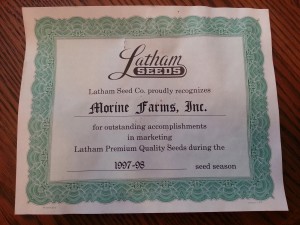 Eric’s dad became a Latham® soybean dealer in 1982 and remained one until his full retirement in 2005.  “The main reason we started planting Latham soybeans is because the company had a reputation for offering high-quality soybeans,” says Eric.  “At that time, we were interested in only public varieties.  Many farmers blamed their crop seed for weed pressure, even sunflower, but we never found foreign matter in a bag of Latham.  Thirty-four years later, we’re still planting Latham for its quality.”

Until he retired from farming in 2001, Eric’s father helped manage the crop and livestock operation that included farrowing hogs and feeding cattle.  Laura, who earned her degree in Ag Business, held an off-farm job but also was interested in livestock.  Both of their daughters showed horses and hogs through 4-H, FFA and saddle club associations.  The horse and purebred hog production went down the road when the girls went to college, leaving only one show horse on the homeplace.

It was unusual for the Morines to be without livestock.  Pork had been produced on the farm from the time Eric’s father moved there in 1966 until 2012.  When Eric saw Laura and their youngest daughter, Sara, eyeing llamas at the 2012 Iowa State Fair, he knew it was time to start looking for livestock.  They walked past miniature Hereford cattle, which were being prepped for exhibition, and the entire family was intrigued.  It wasn’t long before they brought home four heifers to start their own herd.

“Miniature Herefords are the perfect fit for us,” explains Eric.  “Since they have never been crossed with modern European species, an adult female is naturally full grown at 600 pounds.  Their size is just perfect for our existing farrow-to-finish buildings.  We didn’t have to retrofit any gates or pens.  Everything was ‘move in’ ready.”

The family’s Hereford herd continues to grow, which makes good use of the hay and grass they were already baling.  Heifer calves are kept and bred while the bull calves are sold to petting zoos, if they are small enough, or grass finished for beef consumers. 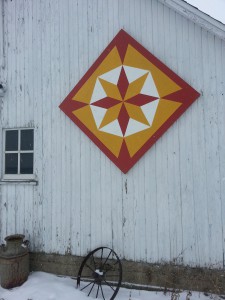 Miniature cattle are becoming more popular since the smaller size results in a carcass that can fit into a family’s freezer; cuts are optimal portion size; and acreage owners can feed their own beef.  Miniature Herefords are a very docile breed, express a lot of character, and the calves have a “tail up” attitude when they play.

Entering the cattle business has been a great way for the Morines to reconnect with friends in the agriculture community, as well as make new acquaintances.  “We always told our daughters that the friends they made through 4-H, FFA, and POAC would help open doors in the future, and that continues to be true.”

While serving as camp director, she was assigned to train counselors through the Camp USA program.  She became good friends with one of those counselors, an English chap named Darren Crocker.  The two wanted to remain in contact during her senior year, so Samantha applied to the Royal Agricultural College in Cirencester, England.  After receiving her bachelor’s degree, she entered a master’s program at the University of Gloucestershire.  Samantha earned a master’s degree in International Human Relations; she and Darren were married in May 2012.  They live in Cheltenham in the South West region of England, where Darren works in marketing for the local university and Samantha helps unprivileged families with nutrition.

Sara, 22, became interested in animal nutrition as a teenager when she bought a horse from an animal nutritionist, who became one of her mentors in the show circle.  She went on to earn a bachelor’s degree from ISU and is now working toward her master’s degree in Animal Nutrition.  She has applied to the Iowa State University College of Veterinary Medicine and also is considering working on a doctorate degree in Animal Nutrition.  Her future endeavors will depend on the opportunities available next spring or fall.

Just as farming and 4-H have been family traditions so has Oatmeal Cake.  Laura’s mom was known to bake this homemade family favorite for special occasions like holidays and birthdays.  That’s why It seemed only fitting to include their mother’s recipe in the Benton County 4-H Cookbook, and today she’s sharing it with us on TheFieldPosition.  Bake someone happy this holiday!