Busting the Myth about Dracula’s Castle

I’m doing another blog about my experiences on the Black Sea Study Trip to Eastern Europe, so hopefully you’re not getting tired of this subject. From converting weights and measurements to contrasting farmer’s markets, there are just so many fascinating things to talk about! 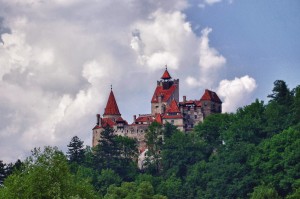 We spent the majority of our time touring farms and learning about agriculture, but we also got to do a little sightseeing. One of my favorite stops was Transylvania, in the heart of rural Romania, at the medieval Bran Castle. This castle has been appraised at $180 million, making it one of the most expensive houses in the world! It’s owned by architect Archduke Dominic Hasburg, Princess lleana’s son, who resides in New York.

Originally built in 1212 by the Knights of the Teutonic Order, Bran Castle remained an important feudal fortress throughout the Middle Ages. Then in 1921, Queen Maria of Romania brought the royal court architect to the castle for extensive renovations and transformed it into a Royal residence. The castle was taken from the royals by the communists in 1948, and in 2006, it was returned to the Archduke.

Bran Castle is better known as Dracula’s Castle.  Dracula, written in 1897 by Brampton Stocker, is one of the most famous horror novels of all time. It’s based on Prince Vlad the Impaler, who was imprisoned in the castle for one night in the 1400s. He was famous for the way he killed his foes and terrorized his enemies.  In fact, killing a vampire with a wooden stake most likely came from his practices. 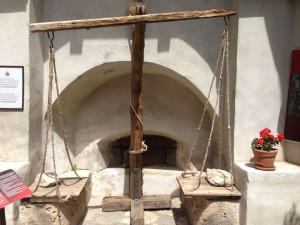 Inside the castle courtyard is a scale that was used to determine whether or not a lady was a witch. The lady was placed on one side the scale; a Bible and some stones were placed on the other side.  If the lady weighed more, she was considered a witch and put to death!

After touring the castle, we enjoyed lunch in the village. The restaurateur told us about his flock of sheep. Since he makes his own cheese from sheep’s milk, we enjoyed sampling many different kinds. He also prepared a very good meal of lamb.  He uses many sheepskins as decorations, too. It was certainly a dining experience unlike any I’ve had in the States! 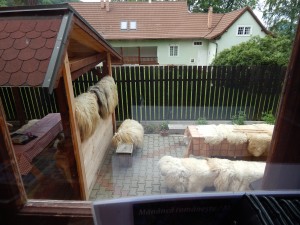 Traveling abroad certainly provides one with unique experiences and perspectives.  I’m thankful to have had the opportunity to see so many interesting places throughout Eastern Europe and to learn about agriculture from half a world away.  Hats off to David Miller and the Iowa Farm Bureau for all of their efforts!