Farmers Markets Open 24/7 in the Ukraine 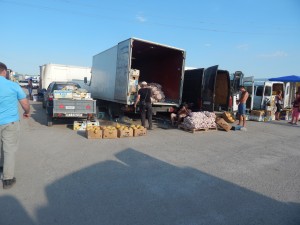 While spending nearly two weeks in June traveling throughout Eastern Europe as part of a Black Sea Study Trip sponsored by the Iowa Farm Bureau, I noticed several differences between our cultures and farming practices.  Last week I blogged about the number of conversions we had to make when discussing acres/hectares and pounds/kilos.  This week I’d like to share some thoughts about their markets.

We came upon The Mother of all Farmer’s Markets in Ukraine!  This wholesale market is open 24 hours daily, 7 days each week.  Massive amounts of fruits and vegetables are sold from any type of vehicle from large farm trucks to horse carts.  Now keep in mind it was about 100 degrees the day we visited, so much of this fresh produce was literally baking in the sun.  And it didn’t smell like apple pie either!  It smelled down right awful.  Cleanliness wasn’t a priority, and it didn’t seem like food safety was either. 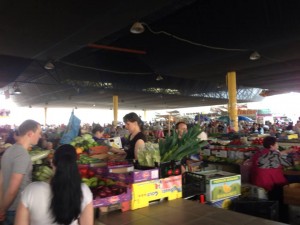 Later we visited the Odessa Privos Market, a large, public market that was founded in 1827.  Tiny booths are lined up for blocks, and it seems as though you can buy anything there – as long as you could fight your way through the crowd.  Some of this market is under roof, and that’s where you can buy just about any animal part imaginable!  There also was a lot – and I do mean a lot – of fish for sale. 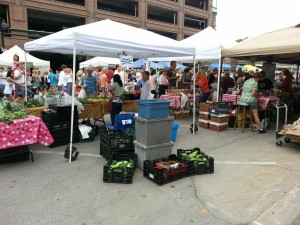 I couldn’t help contrast these two markets with the U.S. farmer’s markets that I’ve visited.  It seems that even the smallest Iowa communities have a local market at least once a week with markets held more frequently in larger cities like Des Moines.  The streets around Court Avenue in downtown Des Moines are blocked on Saturday mornings, so people of all ages can enjoy a leisurely stroll while they choose from a variety of wonderful smelling fresh cooked foods and fresh brewed coffee.  All of the vendors display their wares so neatly, and most have tents that shade their produce from the blistering summer sun.  Farmers sell meat in Des Moines from refrigerated trucks.  Plus there are many beautiful fresh flowers, fruits and vegetables for sale.

Interestingly enough, many Eastern Europeans don’t realize how many fresh fruits and vegetables Americans eat.  Our tour guide in Romania was under the assumption that all we eat is processed foods and sweets.  “Junk food” isn’t something they have broad access to, and there is a concern the health of their kids may decline as new technology streams into Eastern Europe.  As their standard of living improves, how will this change their culture?

After years of oppression, Ukrainians are making great strides now.  Their biggest challenge is developing infrastructure and markets.  It’s hard to get crops to market when trucks keep getting stuck!  But, they have so many rich natural resources.  I have no doubt the Ukraine will play a key role in helping feed the growing world population.