School lunch / nutrition recommendations. Mental health. Eminent domain… There are so many bills of interest to Iowa farmers being considered this legislative session. In today’s blog, I’m going to focus only on using Road Use Tax Funds to repair infrastructure like roads and bridges because a well-developed infrastructure is key to traveling roads safely and efficiently. A well maintained road system is also a competitive advantage for Iowa’s leading business, which is agriculture.

My fear is that our roads are going to fall into such a state of disrepair that we’re going to be driving in conditions like those in Third World Countries. Poor and developing countries don’t have funding mechanisms for roadways, and as a result, their businesses – even their entire economies – are hampered.

I saw firsthand what happens when roads are not maintained when traveling through Eastern Europe as part of the Iowa Farm Bureau’s Black Sea Study Trip. Words alone can’t adequately express the horrible road conditions we traveled from village to village throughout Ukraine. There were so many potholes that our bus driver couldn’t go around them, so he drove on the shoulder. As we watched semis travel these same roadways, I noticed unusual tire spacing in an effort to span the potholes. Each truck driver also carried an unusual number of spare tires. Just imagine the extra expense of all that tire repair! 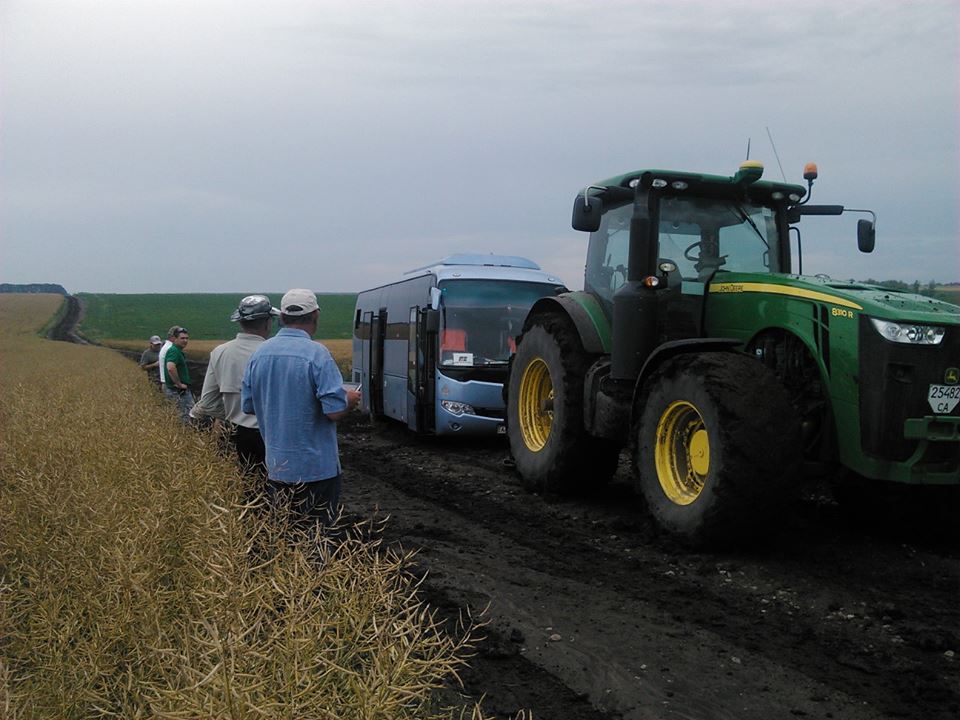 Traveling from farm to farm in Ukraine was even more difficult as the roads were dirt paths. After a small rainfall – perhaps a tenth (inch) or two (tenths), our bus would get stuck. A bunch of us Iowa farmers tried to push a tour bus up a muddy road, we but had to concede and call a local farmers to pull us to the farm with his four-wheel-drive tractor.

My concern is that we’re going to have similar experiences here in Iowa. Many of our rural roads are being downgraded, which means they will get very little or no gravel. Yes, that means you’ll find dirt (or mud) roads in the country! It also means that after the snow melts you’ll find more roads embargoed, or closed. All Iowans, including seed delivery trucks and farmers, will be detoured when trying to make deliveries. Re-routing means taking less direct routes that take more time – and more gas.

Roads were rebuilt daily around the wind farm construction, but they were still difficult to navigate. As a result, I had an extremely difficult time getting my crops to market that year. I can only imagine how many farmers will be affected if major work is doesn’t soon to roads and bridges. 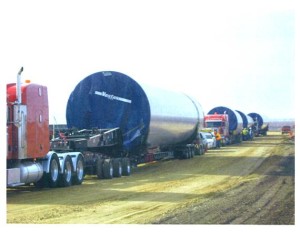 While we all agree that repairs are needed, there isn’t agreement as to how these repairs should be financed. My Facebook news feed has been filled with lots of opinions on this! Some folks are arguing that tractors, which travel for short distances between fields, should pay fuel tax. Others like myself say it’s unfair to charge road-use tax to off-road vehicles. The amount of fuel that farmers use traveling from field to field is so small that I doubt tax money collected from tractors in Franklin County would come close to fixing one bridge. It would be extremely complicated and time consuming to track fuel used by Iowa tractors on the road.

If in-field vs. on-road fuel usage by tractors could be sorted out, I’d be more than happy to pay tax on it provided our roads and bridges would be fixed with that money. (Road tax is a protected fund, which is only supposed to fix roads and bridges.) Farmers are already paying thousands of dollars in taxes that should be allocated toward bridges and roads.

Also keep in mind that the semi trucks, which farmers use to haul grain, run on fuel that has been taxed. Fuel taxes were established to fund road and bridge repair. Don’t these semi truck drivers deserve to have safe bridges and roads on which to operate?

Property tax on farm land is a huge source of tax that funds much of our county budgets including roads. We have so many regulations constraining our county governments, that they have very little say in how the money is spent. We need roads, but we also need government reform. (I feel another blog post coming on here!)

Is there money in the Road Use Tax Fund that could be used better? This is the question I’ve heard raised for the last four years, and I believe the answer is “yes.” Decorative bridges are being built when other bridges would have cost much less money. Some decent roads are being rebuilt while others that are in worse condition are being overlooked. There is talk of widening our interstates to allow for more traffic and to make them safer. All good arguments, but while our leaders are arguing, many very needy bridges and roads are not getting fixed.

Even with more funds available, “prioritizing” will remain problem. Someone still has to decide which roads to fix or build. This is a good place to talk about the formula: How is the money split between different government entities? What do cities get? What do counties receive? What about little towns in rural areas. There current formula for repair dollars is weighted, so the most money goes to areas of higher population. Even with new funding, it will not be shared where it is currently needed most.

I am not in favor of big government. Far from it! But the U.S. government has certain obligations that include: securing our borders, building infrastructure and protecting the citizens of our country! Government officials would have time and money to take care of their own business if they’d let me mind mine!