Stop the Train before it Wrecks Your Property! 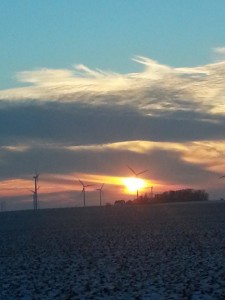 There have been disputes over land to serve a public service as long as there has been ownership of land. Winners and losers are determined by where a public service is located. Big money may be made… or lost! Towns can be created – or abandoned – based on the location of public services.

The little town of Maynes Grove, near where I grew up, was abandoned when the railroad track went through seven miles farther north of Franklin County’s first settlement. As a result, the town of Hampton was born and became our county seat; Maynes Grove is known today only as a recreational area.

Over time, more utilities have been put into place. I’m trying to count how many utilities I farm over, under or around. I farm around wind turbines and under power lines. I farm over an anhydrous pipeline. Numerous power lines, phone cables, and fiber optic lines are buried on land I farm. Some of these aren’t too much of an obstacle but others (like the wind turbines) are a big pain!

Farmers have had to sacrifice for “the public good.” U.S. transportation and energy infrastructure systems are often built with use of eminent domain, which gives government the authority to take private property for public use such as an interstate. I’m sure the decision to put Interstate 35 through Franklin County at an angle was decided by a non-farmer. To a non-farmer, this would seem to be no big deal. As a farmer, it’s a huge deal! The location of the interstate makes farming inefficient as crop rows (point rows) run into each other at odd angles. The location of I-35 also divided many local farms into little pieces. Some farms, which had been in families for generations, disappeared completely.

Now Franklin County is in the midst of a battle to put a huge power line all the way down the west side and then across the south side called the Rock Island Clean Line (RICL). With a name like “Clean Line,” why would anyone want to block the building of more wind turbines?

All of the electrical current is put in at one end in Northwest Iowa and comes out somewhere southeast of Iowa. If there is an excess of energy generated by the wind turbines I farm around, for example, it cannot be added to this line. If there is a shortage of electrical power somewhere along the line, tough.

While grid infrastructure is one challenge, a larger concern is public vs. private good. The RICL is being developed by Clean Line Energy Partners, an investment company looking for big profit. These investors have petitioned the ICC to “act” as a transmission “public” utility to build, operate and maintain this line. Doing so gives them the right to use eminent domain!

How can you justify the government giving private companies the power to take private property away from landowners? “I am not against pipelines or power lines per se: the country has to have them as a key component of economic growth – but private companies should not be able to skate in under the radar as a guise of being a public service provider by use of eminent domain power,” writes David Kruse, author and producer of The CommStock Report.

Many issues are building around this transmission line:

The Illinois Commerce Commission approved the RICL plans, so now the focus shifts to whether Iowa will fall in line. Eminent domain is one of those issues that is easily ignored – until it affects you! Get involved. Do some research. Make your opinion heard by talking to your elected officials. Why now? Once a precedent is set, it’s hard to stop the “train!”