This Land is Your Land… or Is It? 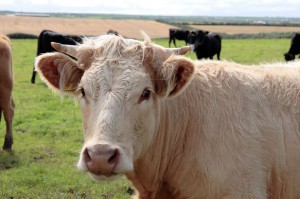 There has been a Wild West standoff in Nevada over the rights to graze cattle on public lands between a rancher named Cliven Bundy and the Bureau of Land Management (BLM).

Last week I posted a comment on my Facebook page, likening this situation to an old western movie and asked what characters John Wayne and Dick Martin would play. When I made that comment, I had no idea how serious the situation was! Fortunately, over the weekend, a standoff ended peacefully when the BLM stood down and released Bundy’s cattle.

The mainstream press has been very quiet about this dispute, so I’ll attempt to summarize the situation. (It’s really pretty long and involved.)  The Bundy family has been grazing their cattle herds for more than a century in Nevada. Under the Desert Land Act passed in 1877 by the U.S. Congress, the Bundy family acquired the rights to land in Nevada.

The Desert Land Act was intended to promote the development of arid and semi-arid lands. The Act allowed anyone to purchase 640 acres of land for 25 cents per acre if the land was irrigated within three years of filing. A rancher could receive title to the land upon proof of compliance with the law and payment of one additional dollar per acre.

Over the years, ranchers passed down what was supposed to be “rights in perpetuity.” They paid a fee when they acquired the ground, and we’re responsible for improvements such as water and road infrastructure. One definition I read of perpetuity is “eternity.”

Bottom line: the Bundy case is really a dispute over property rights. Bundy’s defense is that the federal government doesn’t own the land in question and therefore has no authority to regulate grazing. He doesn’t pay federal grazing fees, like other ranchers do, because he says the government is supposed to be charging him for managing the land. In reality, the government is trying to manage him out of business – and he doesn’t believe he should pay for that.

While Bundy’s viewpoint may seem extreme at first, I believe it merits a closer look. Here’s why… The BLM now controls of much of the western half of this country. In the government’s broad wisdom, it limits the number of cattle grazing a certain amount of acres under the auspices of saving the desert tortoise. Yet, there is no threat that a cow will eat a tortoise.

Cattle graze on grass, but there is no threat the cattle will destroy the tortoise environment. On the contrary, there is evidence of a symbiotic relationship. Tortoise populations increase where cattle are grazing because the tortoise feasts on cow pies. Cow manure is loaded with undigested nutrients, proteins, and minerals.

By eating cow dung, a tortoise consumes far more calories and proteins than grazing on its own. I’m no expert on tortoise diets, so I’ll let you do your own research. There are many myths and half-truths being spread around the Internet that I’ll let you draw your own conclusions.  Some reports say the desert has made such a comeback in some areas that the government is euthanizing them to control the population growth.

Regardless of what’s happening with tortoise populations, I do know that government regulations impede business including farming and ranching. The standoff that unfolded in Nevada late last week cost taxpayers millions of dollars, plus caused stress to a rancher’s family and his stock. Between Saturday and Wednesday, CNN reported that contracted wranglers impounded a total of 352 cattle out of 900 grazing in the area. Reports say these cattle were spread over 600,000 acres, with at least some of the cows with calves.

Horses, helicopters, four wheel drive vehicles, ATVs and even backhoes were brought in for the roundup. Militia groups gathered. Verbal confrontations occurred between the Bundy family and Federal officers. Pictures and a video went viral that shows a lady, who says she’s a cancer survivor, being tased with attack dogs at the ready.

The story even gets bigger with reported behind-the-scene deals by U.S. Senators. Several reports suggest Senator Reid was making a sweet heart deal with a Chinese company to put a solar panel farm on this land. Others report the Senator is working on a deal to provide water to Las Vegas. Water is a big deal in arid regions as Will Rogers once said:

“They have been hunting water in the West much longer than they have gold. If a wonderful spring come out of a mountainside, men left gold, silver and copper mines to come and grab that spring. Water ain’t gold in the West, water is diamonds and platinum.”

Bundy vs. the BLM could be a precedent-setting case. One rancher stood up for his convictions for 20 years because he wanted to make a difference to regulations impacting his livelihood. What difference can you make in your own backyard?