Two weeks ago, I stayed with my son Corey and his kids in Pleasant Hill because they live close to Des Moines where I was attending meetings.  I had barely settled into his home when Corey turned to me and said, “You have to do something about the school lunches!”

The U.S. Department of Agriculture backed the Healthy, Hunger-Free Kids Act of 2010 to “make real reforms to the school lunch and breakfast programs by improving the critical nutrition and hunger safety net for millions of children.”  Unintended consequences resulted, however.  Many school children were starving by the end of the school day, and schools nationwide were burdened with $75 million in implementation costs.

Public outcry led to the USDA relaxing the rules in December, but the federal government still regulates how our kids are fed.  Kids in our schools are about as diverse as farmers!  Some kids have higher metabolism rates.  Other kids are very active in sports.  There are differences between kids and their nutritional needs: you have skinny kids, muscular kids, tall kids, short kids – kind of like snowflakes, no two kids are alike.  So how can a one-size-fits-all school lunch program be right for all of our kids? 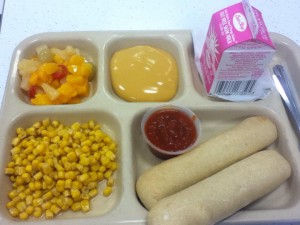 How did it get to this point?  School programs have evolved.  As nuclear families and religion went by the wayside, schools began to take on additional responsibilities.  We have come to depend on our schools to not only teach our kids but to feed them, as well.  With this trend in mind, I believe more emphasis needs to be put on teaching nutrition rather than shoving certain menu items down kids’ throats (pun intended).  All kids are different, so what they eat needs to be different!  It’s just common sense.

The good news is that parents and grandparents have another opportunity to help restore common sense to the school lunch program.  The Sensible School Lunch Act, introduced on March 1, would ensurethat school lunch regulations are both effective and reasonable.  It would permanently lift the cap on proteins and grains in school lunches while continuing to promote increased amounts of fruits and vegetables.