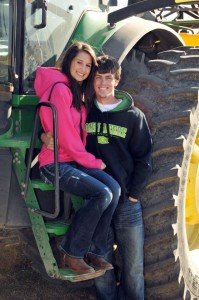 Ben and his fiancé, Chelsea Heikens, are set to wed on June 22.  Ironically, the two will be married in the building were they became reacquainted as the former Bomgaars building in Spencer has been converted into Faith Lutheran Church.

Both Ben and Chelsea were FFA members at Clay Central Everly, but Ben was a senior when Chelsea was a freshman.  It was a few years – and many trips to Bomgaar’s – later, before the two reconnected.

“At the time, I was working fulltime for a farmer from spring through fall and working construction in the winter.  It seemed like I was always going into Bomgaars for one thing or another.  Once I realized Chelsea was working there, I might have come up with a few more reason to head into town,” says Ben with a shy smile. 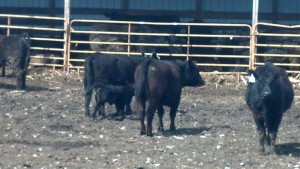 Growing up on the farm and being active in both 4-H and FFA, helped Ben and Chelsea develop a love of the land and a passion for livestock.  As a member of the Clay Raiders 4-H Club, Ben’s favorite 4-H project areas were cattle and hogs.

“I learned a lot about managing livestock and the importance of keeping accurate records,” he says of his 4-H experience.  “You learn from your experiences and look for ways to continually better your operation.”

Such 4-H life skills are still in practice today as Ben helps his dad with the family’s Black Angus-mix cow-calf operation.  Ben runs his own custom baling business, as well.  He also still helps a local farmer, who Ben credits for interesting him in precision farming.  They use GPS data to increase overall farm profitability by managing nitrogen and planting at variable rates.

Seed selection and seed placement are also key factors in increasing profit per acre.  This is where Ben and Chelsea can team up as they get their Latham® seed dealership off the ground.  This summer Chelsea is interning with a co-op.  After earning an agronomy degree this December, she’ll pursue full-time employment in agronomy.

With two busy schedules, Ben and Chelsea plan ahead to spend time together often while enjoying a good meal.  The two of them even cooked up their own recipe for Pot Roast.  And in honor of May Beef Month, they’re sharing it today on TheFieldPosition.com.  Beef.  It’s What’s for Dinner!