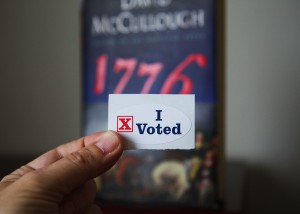 I had a hard time deciding what to cover in this week’s blog post because there are so many things on my mind. First of all, the #schoollunch program is still being discussed across social media platforms. World Pork Expo, which opens to the public tomorrow on the Iowa State Fairgrounds, is a huge event for pork producers across the globe. Even if you don’t want to show hogs or learn about modern pork production techniques, you should attend just for the great food and entertainment!

Barbecued ribs, smoked loins and grilled pork chops are among my favorite foods. I’ve been known to brake for a good hog roast! However, I can’t head for Des Moines without first stopping to vote in Iowa’s primary election.

Primary elections limit the field of candidates for the general election, and I truly believe this November’s elections will be the most important our country has ever had! Our country has certainly “changed” since 2009. It’s time to return to America’s tried and true system of checks and balances. (If you’ve read any of my past blog posts, you know how I feel about government regulations.) One branch of federal government should not be able to push such a one-sided agenda.

America cannot continue its prosperity if government takes more control. *According to our representative form of government, U.S. elected officials shouldn’t make decisions based on one person’s view of the world. Ideology is great for making goals, but U.S. politicians must exercise common sense and exhibit leadership. America’s position as “world leader” is in jeopardy. Think of being paranoid or overly dramatic? Read on…

Sunday night I saw a Facebook friend post a story about an energy agreement between Russia and China. They have agreed to build hundreds of miles of pipeline to provide cheap oil in to China. Is anyone else scared to death about China and Russia agreeing to a 30-year natural-gas deal? Cheap energy gives cheap political power. Russia has already expanded its borders, and China is on the verge of doing the same. What power does the U.S. have in foreign relations now? We have a serious national security threat when these two countries make agreements like they just did!

Another conversation I’ve recently had online was about how China –in just 30 years– brought one-half billion people out of poverty. Abject poverty in China was reduced from 85% of their population to 13%. That’s an unbelievable accomplishment, but at what cost? Coal plants and factories spew pollution so intense that no one can see or breathe. Much of China’s farmland is so polluted that it can’t be farmed. More farm ground was lost as dams are built on rivers to generate electricity.

If developing countries continue their path, I’m afraid America could become a third-world nation with no power! I mention this because the U.S. EPA is making rules to control water rights, which WILL damage our economy and limit job growth.

This country needs CHANGE! I encourage you to actually research each candidate running for election; don’t depend on a candidate’s TV commercials to tell you why you should or shouldn’t vote for him or her. Understand each candidate’s position on issues impacting your livelihood. Know the consequences of rules made by bureaucrats. Discuss with your friends, and make your voice heard!

*Footnote to paragraph 4: Democracies did not originate with the founding of the United States. Founders actually preferred the term “REPUBLIC” to “DEMOCRACY.”

P.S. Since I didn’t have enough room to talk more in more detail about the school lunch rule changes, I’m sharing links to recent articles related to it: