The USDA, since 2010, has been phasing in new nutrition guidelines for school lunches to address the childhood obesity epidemic and to help those at risk of going hungry. The Healthy, Hunger-Free Kids Act of 2010 requires lunch programs that receive federal dollars to provide healthier meals. The latest sets new limits for calories, increases whole-grain requirements and lowers sodium levels.

Vilsack “lashed” out at critics of the program for playing politics with our kids, but this is no real surprise and “playing politics” has become the standard argument whenever Congress disagrees with the current Administration. President Obama has even accused our founding fathers of setting up Congress wrong, claiming the Senate should have representation like the House. Think about that one for a couple minutes!

Before I digress too much, let’s take a closer look at Secretary Vilsack’s comments. He says, “I don’t believe that politics and politicians should trump good policy and policy that’s established by experts when it comes to the future of our children.”

Vilsack makes quite the emotionally-charged statement, but fact is, new school guidelines are being criticized by more than politicians. The School Nutrition Association claims over 1 million fewer students are eating school lunches! With fewer students eating the lunches, schools are having trouble covering the costs.

Last week in The Hill, a representative for the School Nutrition Association is quoted as saying 1,445 schools have dropped out of the program since the standards went into effect as costs mount. A House spending bill approved by a subcommittee last Tuesday would force the USDA to give a temporary waiver to school lunch programs that can show they were operating at a net loss for the last six month. 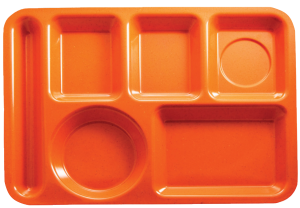 Not only are they operating at a loss in many cases, but schools are having trouble finding some of the required foods. The USDA has confirmed that schools could not find whole-grain pastas that did not fall apart in the giant cauldrons used to prepare school meals, which prompted an announcement last Tuesday by the USDA that it would allow schools to obtain a two-year delay in implementing a whole-grain standard coming into effect.

“The first lady has from day one made the health of our children a top priority, and that means keeping the pressure on to ensure that school nutrition standards already implemented by 90 percent of our schools stay intact,” says White House spokesman Jay Carney said.

“Michelle’s meals turn off kids.” That’s why I’d like to raise these questions:

Let’s remember that many low income students receive most of their nutrition at school. Even if they do take the lunch, how much of it are they throwing away? Placing “nutrition” on the plate doesn’t ensure that kids are going to eat it. Kids are being hurt by hunger!

Vilsack’s experts may be experts, but that doesn’t mean they don’t have something to learn!  They need to humble themselves enough to listen. I’m always amazed how much I learn when I listen, but this administration and Sec. Vilsack are doing a very poor job of listening. I strongly feel this IS all about politics and saving face on their part. Let’s make school lunch rules about kids, not politics! Contact your legislators.