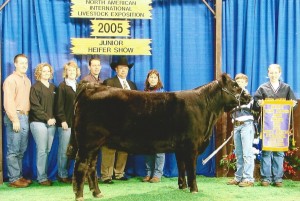 Zach Greiman is pictured here with his Limousin heifer that was also Reserve Champion in the Jr Show at the North American International Livestock Exposition in Louisville, KY.

It’s no wonder showing cattle is such a big part of Zach Greiman’s life as he literally grew up in and around the show ring.

Zach was born on a Monday, weighing 10 pounds, 11 ounces. His mom, Sis, jokes that he was a good gainer because he weighed 12 pounds by that Saturday. Sis had responsibilities as a member of the Sale of Champions Board at the Iowa State Fair, so the new family of four hit the road that weekend and met other family members in Des Moines at the fairgrounds.

“It’s like showing gets in your blood,” says Zach. “My Grandpa Cliff passed away when I was five, but Uncle Don was always at my shows. He usually had some great advice but even better stories.”

In fact, Don Greiman has so many stories to tell that he’s literally written a book about living “A Blue Ribbon Life.”

Times have changed since Don and his brother, Cliff, showed cattle. At first, they took trains to shows. Later, they could haul their own cattle. Even showing and fitting standards have changed through the years. Don and Cliff just washed and brushed the hair to fit their cattle; very little clipping was done. By the time Cliff’s son, Cory, started to show, higher powered cattle blowers and better fitting products had been developed. Cory, who is Zach’s dad, also had more shows to attend than the generation before him.

“My dad grew up showing cattle and working on the farm. He couldn’t wait to get out of school to farm and work on his show cattle. He traveled the county like I do clipping cattle. Our fitting products and clippers just keep getting better as do our choices in feed rations.  AI (artificial insemination) and embryos have improved genetics. As a result, cattle today look much different than those in the photos of Uncle Don and Grandpa at shows.” 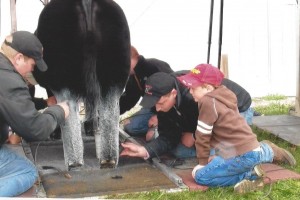 Zach fitting the right hind leg at a show and instructing a young 4-Her on how to do it right.

Just as cattle shows have changed through the years, cattle sales have changed. Today a growing number of livestock is bought and sold online, which is a far cry from the way auctions were conducted when Zach Greiman’s dad was a 4-H member. It’s an even further departure from the way his great great grandfather began his Angus herd by corresponding via U.S. mail in the late 1800s.

Both on-farm and live auctions are promoted today through social media and Internet marketing. Some producers start promoting newborn calves as soon as they hit the ground.

“Many producers are on Facebook, so potential buyers watch videos there or on YouTube,” says Zach. “Videos help me decide if I want to make the drive to a farm or ranch. If I like the video, I want to look at the calves before I buy them. I also sell cattle all year long by posting videos on Facebook and YouTube.”

Zach helps fit other producers’ cattle for online auctions, and he also sells some of his own calves online. Firms that host online sales post the sale dates, send out email reminders, and post the sale including videos. A buyer scrolls through the lots and can bid on whichever one they like. The cattle can be viewed anytime once the page is up.

“I have mixed emotions about online sales,” says Zach. “One advantage is that buyers and sellers can participate in multiple sales on the same day without leaving home. Buyers and sellers alike save on travel time and expenses. Another advantage is that I can take my time clipping and videotaping the animals for sale. However, the work is about the same for a live auction and an online sale because the calves still must be fed and clipped. Sometimes a sale is a combination live sale and online auction. A firm sends a rep who videos the cattle going through the sale ring and bids are taken from the stands, on the phone or via computer.” 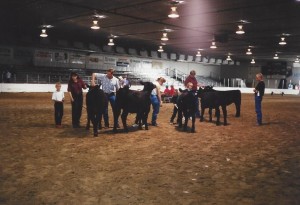 Zach was about five years old when he showed for the first time at the North Iowa Fair, joining his sister and cousins in the showring. His mom, Sis, is in the ring giving him instructions.

Regardless of how a sale is made, raising show cattle is a year-long business. Zach travels most of January, and the largest event he attends that month is the National Western Stock Show. February is a busy month with the week-long Winter Beef Expo in Iowa. March and April are filled with Iowa Junior Beef Breeds Association (IJBBA) shows on weekends. The IJBBA show season is February through September. All breeds are shown, points are collected and it concludes with an awards program.

Also during the spring months, Zach travels to several shows and sales in the southern states. He’s home most of May to help plant his family’s crops, but he attends an occasional weekend show as time allows. Then he’s gone three or four days at a time in June and July to attend field days and regional shows.  July is filled with county fairs and national shows, which last a week at a time. August and September are filled with state fairs last for one to two weeks, depending on how many breeds a person shows.

Fall is especially busy. Calf sales start in September, so Zach spends his “free time” clipping entries for those. He focuses primarily on sale cattle in October, although Ak-Sar-Ben and the Kansas City Royal also are held that month. November is spent at sales and at the North American International Livestock Exposition (NAILE) in Louisville, Kentucky. Zach finds himself home more in December, but that’s also when he gets ready for his cows to begin calving.

“I’m gone fitting other people’s cattle at least half, if not three-fourths, of my year,” says Zach. “I try to work my travel schedule around field work and seed sales.”

To learn more about the Greiman family’s cattle operation, click on the links below: