Knowing Family Lineage is Second Nature to these Producers 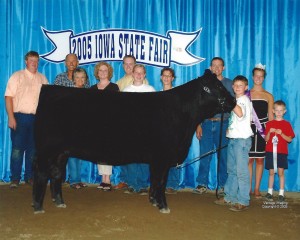 Just as some people are interested in learning about each branch of their family tree, cattle producers who sell breeding stock know the lineage of each animal they’re either selling or buying. Zachary Greiman, who farms in North Central Iowa, says his family can trace the beginnings of their Angus beef cattle to the late 1800s.

“My great great grandpa Fred Greiman emigrated from Germany and eventually settled in Garner,” says Zach. “He sent cattle by rail to markets in cities like Chicago. While accompanying a load of Shorthorn steers to market one day in 1893, he saw a display of Angus bulls.”

The opening bid for an Angus yearling bull went for more than Fred’s whole rail car full of cattle brought! He didn’t purchase one that day, but he was determined to own an Angus bull. Three years later Fred was in the co-op elevator when he saw a poster advertising a South Dakota farmer was interested in trading a Percheron stallion for an Angus bull. 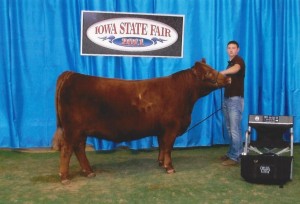 The two farmers corresponded by mail. After some months, they agreed to exchange animals. Fred placed his prize-winning Percheron stud on a railcar and eagerly awaited the arrival of his Angus bull. When the bull finally arrived, it wasn’t what Fred had expected. He had traded an 1800-pound stallion for a 400-pound Angus bull!

“The neighbors laughed at the trade until Fred’s Angus cross calves started topping the Chicago market,” says Zach. “We still have the crate that bull was shipped in, and it’s a great reminder that perseverance pays.”

Who would have guessed that bull would become the foundation for one of Iowa’s oldest and longest continuing Black Angus herds? Upon Fred’s retirement, his son Addis took over the herd. Then Addis’ sons, Cliff and Don, formed Greiman Angus Farms. Greiman Angus Farms was then purchased by Cliff’s son, Cory, and Don’s son, Ted.

Ted remained strictly Angus while Cory diversified. He kept the registered Angus base but crossed those cows with other breeds to increase his customer base. That’s a philosophy that his son, Zach, shares.

“I really don’t care about color or breed.  I just like a good one,” says Zach, who raises cattle in partnership with his dad. “We focus on breeding females. The majority of our herd is Angus and Simmentals. We also have Chianina, Maintainers, Red Angus, Lim-Flex, Simmental, Foundation Simmis. Most of our cattle are registered, but we have a handful of crossbred cows.” 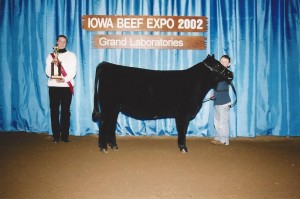 Although they sell more breed cattle than club calves, Zach says he really enjoys the club calf side of the business. His dad started raising club calves in high

school, so Cory had developed a pretty good market by the time he attended college. When Cory and Sis got married upon graduating from Iowa State, selling cattle was their main source of income. They held an annual club calf sale for years on their farm.

“My sister and I both started showing cattle when we were five.  We got the tamest feeder calves or a very quiet cow calf pair,” says Zach, who explains that as they got older, he

and Morgan entered other livestock projects at the Iowa State Fair through 4-H and FFA. “My sister showed a horse at the state fair. We both showed pigs and cattle. Our family members, including Uncle Don and Aunt Yvonne, would always be in the stands watching us.  I hope I make him proud continuing the family tradition of showing and raising cattle.”

Some people would feel like they had big shoes to fill. Jealously would tear other families and friends apart, but it’s obvious that Zach has a great deal of respect for his family members, as well as for the families with whom he’s shown cattle for years.

The Family Tree Branches Out 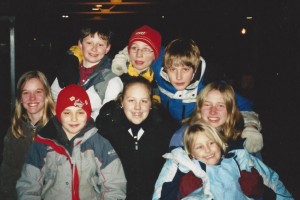 “Great Great Grandpa Fred and Great Great Grandma Deana had 14 kids.  When they got married he gave them each a quarter section of ground with the opportunity to buy an additional 80 acres. Most of them stayed in the area and live around me,” says Zach. “People are surprised to learn just how well our extended family gets along. Some of my best friends are my cousins. Kyle and Cole Greiman are my first cousins, and for the longest time, many people thought we were brothers. The four of us have spent a majority of our time together as we live only one mile apart, share the same interests and are very close in age.”

Traveling to cattle shows was so much fun, adds Zach. The Jass families (Courtney, Kerstin, Chase, and Trey), the Weavers (Brittany, Kelly, Rachelle), the Andersons (Derick, Mara, Kylee, Jalynn), and the Greimans (Zach, Morgan, Kyle, Cole, Grace, Shelby, Jacob) were all cousins. Although the Tushas and Nedveds are also from Garner and showed with this group in the later years, they aren’t related.

“We all stalled together, stayed at the same motels, helped each other out, had fun and showed together,” says Zach. “For the most part, we all showed a different breed of heifers or steers.  Usually one of us won something, which gave us all reason to celebrate.  At one winter Beef Expo Junior Show, the kids from Garner had six of the breed champions in the final lineup.”

“We also did a lot of 4-H and FFA livestock judging,” adds Zach. “Morgan, Brittany, Kyle, and Courtney were the senior team. Cole, Chase, me, sometimes Trey or another friend, Josh Christians, were the junior team.  We won lots of contests. The senior team won trips to Indianapolis, Kansas City and Denver. To this day, we still hang out and help each other.” 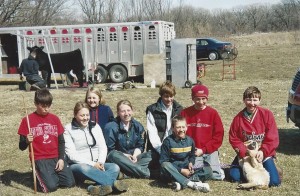 Neighborhood cousins at a cattle show in Fort Dodge, IA

Like many kids interested in livestock projects, Zach was a Clover Bud until he was old enough to join 4-H. Then he joined FFA in high school. Zach also belonged to the Angus, Limousin, Maine, Chianina, Red Angus, and Simmental Associations. He belonged to the Iowa Junior Beef Breeds Association, too. He served as an officer in several of these organizations, met many good friends, competed in an array of contests, and traveled nationwide to attend meetings and shows.

Networking by meeting new people, providing oral reasons at a livestock show and attending meetings is second nature. “It’s what I‘ve done all my life so it doesn’t seem like going work,” says Zach, who continues to spend his summers traveling the show circuit. He fits cattle for others, plus he judges a fair amount of cattle shows. In addition, Zach sells Latham® brand seed like father and grandfather before him.

“Both businesses complement each other,” says Zach. “Last weekend, for example, I was judging a cattle show. In my bio, they announced that I was a Latham® Seed dealer. People came up to me after the show to talk about seed. Latham has great products, and the alfalfa line up is fabulous. When cattle friends ask about what we feed and what would work for them, I’m happy to recommend Latham products.”

Raising and selling cattle is certainly Zach’s passion. He says he also enjoys eating, so while he was attending Iowa State University where he graduated last May, Zach honed his cooking skills. Of course, he prefers meals made with beef. Today he’s sharing with us two of his family favorite recipes. 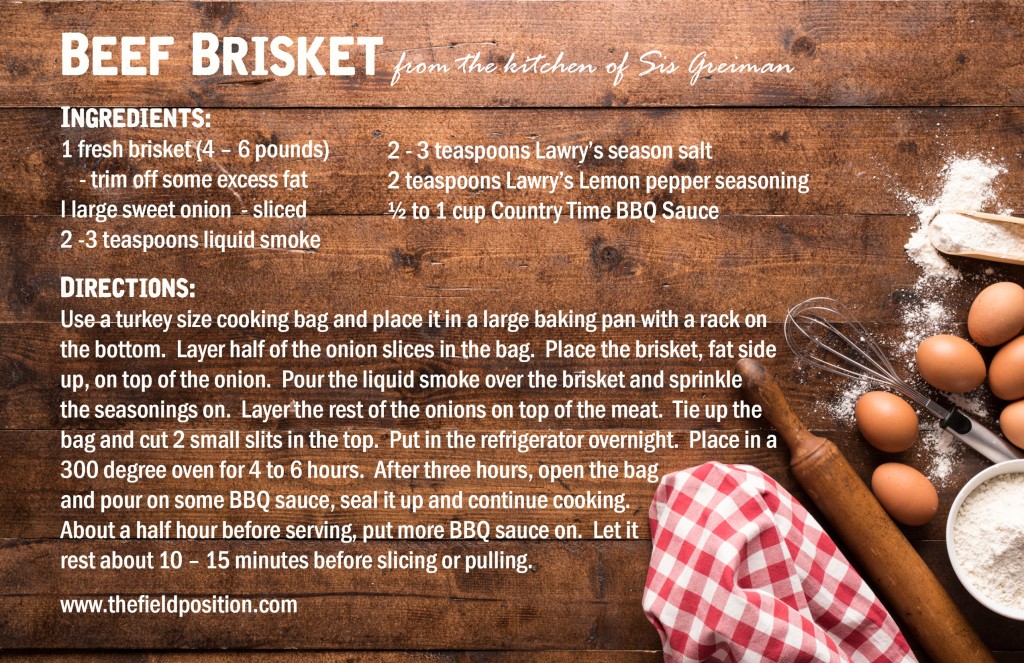 Peppers (any color), onions, mushrooms – cut up in small chunks

Marinade the cut up roast in the refrigerator overnight.  Alternate meat and vegetables on skewers. Grill 4 to 5 inches away from moderately hot coals (or broil) for 4 to 8 minutes (depending on heat) for medium-rare, turning frequently. Brush with marinade during grilling process.