Dream Big… You Can Be Anything!

“What do you want to be when you grow up?”

That’s a question kids are asked practically from the time they’re able to talk. When my daughter was in preschool, she answered the question by saying she wanted to be a gymnast. That really came as no surprise since she started taking tumbling lessons when she was two years old.

If you would have asked me what I wanted to be when I grew up, I would have said a veterinarian. Going to the sale barn and buying bottle lambs with my dad was a highlight of my days before I started kindergarten. As I got bigger and stronger, I accepted with more responsibilities like docking tails and giving vaccinations.

When I was in either upper elementary or junior high school, I remember my dad asking a local vet about what I should study if I wanted to be a vet. I was standing by the two of them as the vet was on a service call for a distressed ewe in labor. He told my dad that girls shouldn’t be vets. Although my dad refrained from giving him the boot right then and there, “Dr. X” never again got called when we had a sick animal.

Dr. X most likely couldn’t fathom a female large animal veterinarian because he’d never met one! He only knew what he had experienced. The dreams of many young children also are shaped by the world around them. I remember my young nephew telling me, “I know I don’t want to work in the post office. I know I don’t want to run a restaurant. I don’t really know what you do, so I don’t know if I would want to do your job.”

How can we get kids to dream bigger? How can we provide role models where there aren’t any?

Mattel is trying to encourage girls to dream about the future by recreating the Barbie® doll. They’re using social media to show little girls pretending to be a college professor, a soccer coach, a veterinarian, a businesswoman and a museum guide. (These advertisements are so well done! It’s worth two minutes of your time to clink on this video link.) With more than 150 careers, Barbie is sending a message to little girls that they can be anything.

How empowering! I wonder how many little girls are spending their Christmas vacation from school playing with their new career Barbies.

Christmas brings back great childhood memories. Santa often brought my cousin Angie and me similar gifts. We received matching or coordinating clothing, as well as toys. Then our working moms would take us to one house or the other where we’d spend the day together playing with all of our gifts. One year we got the most amazing telephones! We could call one another in different rooms of the house, so we spent countless hours over that winter vacation playing office. We also spent countless hours playing school. Fast forward 40 years and my cousin is a special education teacher, and I enjoy hosting fall field trips to my little pumpkin patch.

One thing’s for certain, if there would have been a Barbie veterinarian back when I was writing letters to Santa, that doll would have been on my list! I probably would’ve asked for Farmer Barbie, too. She definitely would’ve made my list if she came with a flock of Suffolk sheep!

Creators of Barbie and makers for Mattel say the new career dolls provide role models where none existed. That’s why I’m such a proponent of the Farmher movement because young women in agriculture today are growing up with role models who are making a living in agriculture.

In last week’s Women in Agriculture post, Julianne Johnston shared how having three strong female role models made all the difference to her career success. We want to help inspire boys and girls of all ages to pursue agricultural careers, including farming and selling seed. Watch for new and exciting announcements from us in 2017! 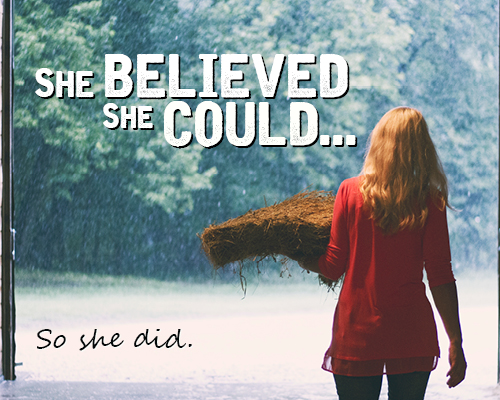