Julianne Johnston, digital managing editor for Pro Farmer, didn’t realize how unique it was being a female in the ag commodity world was until she spoke at Farm JournaI’s Executive Women in Ag (EWA) conference five years ago.

“I realized I was in a male-dominated field, but I didn’t think it was a big deal until a young lady came up to me and said she was excited to finally meet me because she’s been following my career,” says Julianne. “That shocked me but also made me realize how important mentoring – even from a distance – truly is. The women who attend EWA are eager to learn and ask amazing questions. The excitement from that event is hard to explain, but it energizes me.” 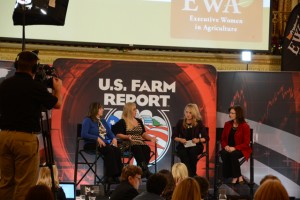 Each year Julianne has been part of a female roundtable during EWA for a live taping of “U.S. Farm Report” that also includes Naomi Blohm of Stewart-Peterson and Angie Setzer of Citizens LLC. J views her fellow roundtable members as friends rather than competitors. They challenge and encourage once another because they’re all professionals and mothers.

In fact, surrounding herself with positive role models has been key to Julianne’s success.

“Early in my career I was focused on learning as much as I could from the established Pro Farmer editors. At the same time, I was newly married. Not long after that, we were starting a family,” says Julianne. “It’s a good thing I was raised by a hard-working farmer, because I look back and realize I didn’t know anything different than working hard and juggling everything I was blessed with.

I remember a moment when I had a baby in one arm, was on a press conference call with Senator Grassley, and was on deadline for on a story. I hadn’t yet had time to shower for the day when my doorbell rang. It was then I realized I had hit maximum capacity!”

Fortunately, Julianne was part of a corporate culture that allowed her to shift jobs after her second daughter was born. She worked fulltime from home for AgWeb.com when it launched in 2000.

“It was exciting to be the first and only editor for AgWeb.com when it launched. I was on my own very and it was make it or break it time,” says Julianne. “As the growing season began, I wrote a headline, ‘How are Your Crops?’ hoping to get a few emails that would generate story ideas. My inbox was quickly flooded with emails, and ‘Crop Comments’ was born!”

Based on her 25-year career in agriculture, Julianne offers this advice to young FarmHers:

1. “Don’t let fear keep you from following your dreams! On the other side of fear is freedom from fear. We all must face our fears at some point if we want to conquer them, so my advice is to be prepared. When I attended Iowa State, just 25% of the students in the College of Ag were female. Now it’s split evenly, as it should be, and young women should find that encouraging 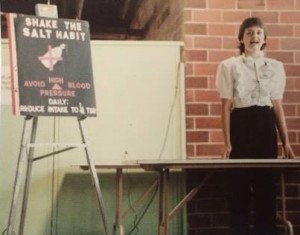 Julianne Johnston, pictured here presenting at the 1983 Iowa State Fair, says her involvement in 4-H and FFA provided a baseline for her career. “My mom made me practice in front of a mirror. That was good advice! By the time I joined FFA in high school I wasn’t intimidated by the process of putting a speech together. Obviously, that laid a lot of the groundwork for my career.”

2. Surround yourself with good people. Form your tribes early in your career. Having strong female role models has made all the difference in the world. It reassured me that a career, in whatever field I wanted, was possible. Make friends with people who will cheer you on, and choose your spouse wisely. I’m blessed with a supportive husband. He wants the best for me and I want the best for him. My sister-in-law Linda Haywood, who was one of the first female ag instructors in Iowa, made sure my speeches for FFA competitions were written and practiced. I remember having long conversations at my county fair with Annette Sweeney, who later became the first female Iowa House Ag Committee chair. Annette made me feel special because she saw something in me. And I’m forever grateful to Carol Balvanz, who’s now with the Iowa Soybean Association, because she gave me my first “real” ag communications job at the Iowa Cattlemen’s Association. I have stayed connected with these women through my career and am grateful for the time they have spent mentoring and encouraging me.

4H and FFA also taught me the importance of networking. I leaned to meet new people. That’s one area that I hear from young people they don’t look forward to, but it’s so important. I enjoy talking to young professionals about their education, career and goals. I enjoy networking with farmers, women in ag, people in the commodity world and ag communicators.”

3. Be open to trying new things and honing new skills. In my 40s, I have learned the importance of being adaptable and learning new tricks. I’ve been part of several website redesigns and builds and have enjoyed the challenge of learning new technology. You must remain adaptable to maintain a presence in the digital world. Because technology is important to all of agriculture, I believe it’s important to watch trends and to learn continually.”
Agriculture