Beauty in Boots: Image of American Farmers Gets a Makeover

Media images most often show super models as young, tall and thin females wearing the latest fashions. Farmers are most often portrayed as older men who are sporting overalls. At least that was the case… until an Iowa photographer was determined to show that tough and beautiful, female farmers defy stereotypes. 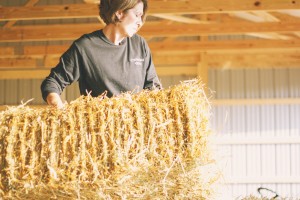 “Too often, the beauty of a woman, of an image, is judged by a face,” photographer Marji Guyler-Alaniz, who founded FarmHer, is quoted as saying in this Yahoo! Beauty post. “These are beautiful women, doing beautiful work and my goal is to bring an appreciation to what they do.”

I felt vindicated as I read that article. Here’s why…

As a 21-year-old new college grad entering the male-dominated world of agribusiness, I tried to mask the fact that I was young and female. I dressed in khaki pants and men’s button down shirts. I pulled my hair back and didn’t spend a great deal of time in front of the mirror unless I was headed to the Statehouse. When I was lobbying on behalf of agribusiness at the state level, I tried my hardest to look – and sound – smart. I donned glasses and a suit. I walked and talked with purpose. And I earned people’s respect.

Fast forward 10 years and I made a career move that took me from living and working in the Golden Circle around Des Moines to working on a Century Farm that was located 100 miles north of our state’s capitol. Once again, I entered a conference room filled with men. Once again, I did what I could to mask my femininity. I remember joking once that a girl can never own too many short-sleeve polo shirts with a seed company logo.

I worked hard to be taken seriously. I challenged the status quo. My out-of-the-box ideas were often met with skepticism, but I held firm to my convictions. I even started The Field Position blog in 2008, when most people had no idea what business purpose an “online journal” could possible serve. 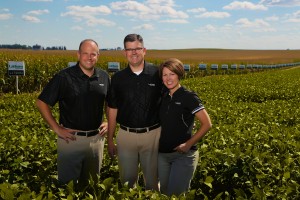 While I was smiling on the outside, I was longing to “just be me.” That caused me to ponder the question, “Who am I?” (Yes, these are the deep thoughts I would have while driving hundreds of miles alone on the open road without books on tape and before Sirius satellite radio!)

Attending the first Executive Women in Ag (EWA) six years ago was a real epiphany for me as I realized I wasn’t an anomaly. I found myself sitting in a beautiful downtown Chicago motel filled with strong women who weren’t masking their femininity nor downplaying their intelligence. Words alone aren’t adequate to express how comforting it was to find myself in a room of women with whom I could relate.

I’ve come to see that, like Donnie and Marie Osmund, I’m a little bit country and a little bit rock ‘n roll. Some days I prefer to wear flannel shirts, blue jeans and cowboy boots. I also look forward to buying a new dress, wearing lipstick and attending a nice dinner. I can run a meeting. I can run a business. Or I can run my kids to a football game or to a horse show.

That’s why I’m so passionate about the FarmHer movement. I love that FarmHer celebrates women and encourages them to be who they are! I love that the FarmHer series on RFD-TV shows women as strong yet beautiful. And I love that women like April Hemmes, Cristen Clark and Steph Essick are role models for the young ladies who want to farm their own ground.

Women have been blazing trails for decades and today they’re being recognized for their contributions. Women’s roles have changed, and are truly changing the agriculture landscape. Today’s young women are growing up with female role models, and at Latham Seeds, we’re proud to help shine a light on these women on Mondays when we feature FarmHers. If you know of someone you’d like us to feature, please comment below or email me.