Social Equality Reduces the Will to Work

President Obama on Sept. 15 signed an executive order requiring government agencies “to use behavioral science insights to ‘better serve the American people.’ According to a recent article in the Harvard Business Review, federal agencies have been instructed “to identify policies and operations where applying findings from behavioral science could improve ‘welfare, program outcomes, and program cost effectiveness’.”

Striving to improve government efficiency is nothing new as governments have been “nudging” people since time began. Penalties are put in place to keep you from doing what government officials believe shouldn’t be done. Taxes are used to influence our decisions, and tax breaks are given to encourage certain behaviors or actions.

Consider the breaks given for a business to locate in a certain town, a certain area or town or within a particular state. Before deciding whether to expand, relocate or change in their business, executives now factor in government programs to see which town or which state will give them the biggest breaks. Incidentally, Forbes magazine reports that Utah is the top spot for business. North Dakota comes in second; Nebraska ranks seventh; Minnesota is ninth; and Iowa ranks 12th.

One of the biggest nudges right now is the penalties put on to our best sources of energy. “The EPA is worried about climate change and is making a huge push for clean air. Biofuels like ethanol fit so well into their plans, yet the EPA wants to reduce 2015 and 2016 blending requirements by at least 20 percent.”

Another nudge is being given to improve water quality. Believe me, I support water quality but what concerns me is how government agencies have the ability to control public perception simply by choosing which information to release and when. As I’ve written before, today’s technology can detect smaller amounts of pollution in our waters. Standards have changed, so more bodies of water than ever before make the “polluted list.” However, farmers are doing a better job of adapting conservation practices that make a positive difference in improving water quality! 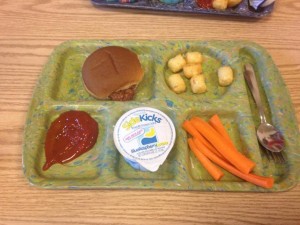 Public school lunch programs scream behavioral change. “Big Brother” definitely has his hands on kids’ lunch trays, and the latest nutritional guidelines aren’t even being used for better health for the kids. Instead, federal guidelines released last spring call for a reduction in red meat consumption based on the claim that a plant-based diet reduces the carbon footprint. So… the overlying reason to change U.S. dietary guidelines is actually a political ploy to manage beef production practices that don’t even take into account what sustainable production practices are already in place by U.S. beef producers!

Right or wrong, the party in power uses laws and regulation to push their agenda, and that’s why it matters who gets elected. I realize what I’m about to say next isn’t politically correct, but we’ve got to “stop feeding the bears!” (NOTE: This blog is entirely my own opinion.) The Supplemental Nutrition Assistance Program (SNAP) cost almost $80 billion in 2013, which is twice the amount it cost before President Obama took office on Jan. 20, 2009.

Making Americans dependent on social programs and using taxpayer money to advertise welfare programs won’t lead to government efficiency or to a more productive society! Making it easier and easier for people to sign up for social programs is a nudge in the wrong direction!

The big buzz now is that all Americans must be treated equally, but is everyone putting forth an equal effort?! Honestly, isn’t anyone else besides me concerned about President Obama’s mandate to use “social science” to serve people?

The U.S. Government was set up with very specific powers. How have we gotten to the point where federal government controls what we eat, what we use for energy and essentially how we live? What’s happening to our individual freedoms? Every aspect of how we live is being nudged by government!

Hopefully, my blog today is a “nudge” to all voters! Americans should have equal opportunity, equal potential. Hard work and ingenuity is what made our country great, and it can make this country grow again if we let it. Government “nudges” and social equality do not work because you can’t take from workers and give to the non-workers or the will to work fades! Remember, communist regimes in Germany and Russia fell for a reason.