More than 300 American farmers rallied July 15 outside the U.S. Capitol building to promote the Renewable Fuels Standard (RFS). They wanted to call upon the Environmental Protection Agency (EPA) to raise the RFS volumes for corn-based ethanol that were cut in the final rules for 2016. Final public comments on the proposed RFS changes are due July 27. 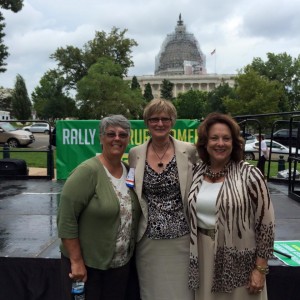 More than 300 corn growers from across the U.S. rallied on July 15 in Washington, D.C. Pictured here are Lindsey Burrier, corn grower from Maryland; Pam Johnson, NCGA past president from Iowa; and Annette Sweeney, co-chair of America’s Renewable Future campaign.

“The EPA is worried about climate change, and it’s making a huge push for clean air. Biofuels like ethanol fit so well into their plans, yet on May 29 the EPA announced it wants to reduce 2015 and 2016 blending requirements by at least 20 percent,” says Annette Sweeney, co-chair of America’s Renewable Future campaign. “If the EPA takes such action, it will be breaking the law! The Renewable Fuels Standard was established by law in 2005 and updated in 2007. By proposing new standards, it sounds like the EPA is trying to bypass the lawmaking process.”

As a former Iowa State Representative and chair of the House Agriculture Committee, Sweeney is well versed in political procedure. As a third generation farmer, she understands the importance of production agriculture to both the Iowa and the U.S. economy. She also understands how rules like this could affect each farmer’s livelihood as her family’s diversified farm in North Central Iowa includes corn, soybeans, cattle and fish farming enterprises. Plus, Sweeney understands how our political climate impacts U.S. jobs and investments.

Speaking of investments, Sweeney finds it curious that on June 18 the Department of Energy (DOE) announced it will invest $55 million in advanced research projects to accelerate biofuel crop development. The DOE says it will put another $30 million into “transportation energy resources from the renewable agriculture program to support six projects developing plant remote sensing analysis.”

“Why invest $55 million in biofuel crop development if EPA is jerking the rug out from under ethanol?” asks Sweeney. “Why spend another $30 million to build infrastructure for other biofuel crops when we already have infrastructure in place to produce biofuels? Are agency officials really interested in taking away that market from America and their freedom to choose their fuel? It makes me wonder why is the RFS is really being targeted. Who is pressuring the EPA to make these changes?”

Recent actions by the EPA and other federal agencies make it appear this administration is talking out of both sides of its mouth. The White House announced June 10 the U.S. Department of Ag will spend $7 million on 550 renewable energy projects and upgrades on small farms and businesses and rural businesses.

“What good will it do to invest this money if the EPA cuts the RFS?” asks Sweeney.

Ethanol could help at least three U.S. agencies meet their environmental priorities. It’s seems suspect that only 17.4 billion gallons of ethanol being proposed to be blended into the U.S. fuel supply in 2016 rather than 22.25 required under the Energy Independence and Security Act. Why isn’t corn being considered as a clean alternative fuel under the U.S. Environmental Protection Agency’s (EPA) Clean Power Plan? The National Association of Clean Air Agencies on May 21, 2015, compiled list of 25 strategies that states can employ to comply with EPA’s Clean Power Plan. So why isn’t ethanol a top strategy for states?

“Let’s add climate change into the mix,” says Sweeney. “Biofuels are clean burning, renewable and sustainable. So why aren’t we using more ethanol to fight the climate change if this administration is so concerned about it?”

“I’m not trying to make the RFS a political issue. I’m merely raising questions,” explains Sweeney. “Agriculture should not be partisan. After all, we all eat! Agriculture is key to a strong U.S. economy and that’s also something all Americans – regardless of party affiliation – should be able to agree upon!”

Click here to encourage the EPA to uphold the RFS. Comments are due July 27. Be sure to change the subject line on your email to the EPA and personalize your message.

“The RFS is the only policy trying to level the playing field for renewable fuels,” add Sweeney. “I stand behind the Renewable Fuel Standard and what is right for America I hope you’ll join me! Please send your comments in support of the RFS to the EPA by July 27.”