A typical Iowa family farm usually consists of approximately 360 acres that get planted to corn and/or soybeans. Sometimes the farm also includes a livestock enterprise, such as cattle or hogs. Some families, desiring to bring the next generation home, look for additional income opportunities such as a seed dealership. 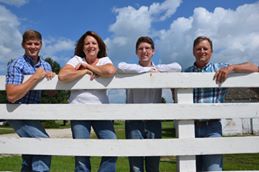 With both of their sons interesting in returning to the family farm, Annette and Dave Sweeney are taking a non-traditional approach to make room for everyone. Joe Sweeney is pictured on the left; Jim in between his parents.

“With farmland and cattle prices as high as they are, growing our existing operation wasn’t a viable option,” said Annette Sweeney, who in 1983 moved from Illinois where she was teaching middle school to take over her family’s 1,350-acre row crop and cow/calf operation upon her father’s untimely death. “Both of our sons would like to be a part of our family farm, so Dave and I decided to take a non-traditional approach to help make that happen.”

The Sweeney’s youngest son, Joe, became interested in fish production. As a student majoring in Ag Business, Economics and Entrepreneurial Studies at Iowa State University (ISU), he learned there was a supply gap for fish. He wanted to make a mark for himself, and Joe was interested in owning his own business. 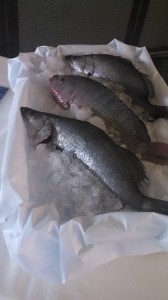 Much research on fish production has been done at Auburn University, so Joe reached out to experts there. Once he graduated from ISU in May 2013, Joe spent that summer traveling and conducting his own research. He visited Auburn, as well as traveled to other fish farms and fish markets in Alabama, Arkansas, Mississippi and Georgia. Sometimes he traded “labor for lessons” from other fish farmers.

Breaking ground in July 2014 for Buckeye Fish Company’s production facilities was the result of two years’ preparation. Joe wrote a business plan and secured funding. His parents sold him land on which to build the fish farm. His older brother, Jim, designed the solid core insulated panel building. From the outside, the building resembles a machine shed. On the inside, you’ll find state-of-the-art systems that regulate air and water flow. Lighting simulates daytime and nighttime.

Jim earned a degree in structural engineering from Iowa State and has worked since 2011 as an engineer for Energy Panel Structures in Graettinger. The brothers worked together innovating floor plans and materials typically used for hog and chicken production, so they would be better suited for the higher humidity environment created by fish production.

After eggs from Barramundi Seabass hatch, the fry are flown from Australia to the Minneapolis airport. From Minneapolis, the fry are trucked to a bass farm in Webster City where they’re grown to about four inches long. The fingerlings are then transported to Buckeye Fish Company where they’ll be fed to 2 pounds.

The first fingerlings are expected to arrive mid-March. Buckeye Fish will take a staggered approach to filling and emptying tanks, so fingerlings will be placed in 2 of the 24 tanks at first. Two more tanks will be filled each week for the next 6 months. When running at full capacity, Joe and the other five farm families involved will produce nearly one-quarter million fish annually. It takes approximately 6 months for each tank of Barramundi Seabass to be market-ready. 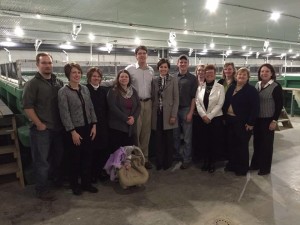 As part of her statewide tour, Lt. Governor Kim Reynolds on Wednesday toured Buckeye Fish Company with a group of women in ag from North Iowa.

“The trend toward farm-raised seafood represents a great opportunity for us to enter this market early,” says Joe. “Farm-raised seafood has surpassed beef in worldwide consumption. China, which has been the primary seafood supplier to the U.S., is expected to reduce its exports in coming years. The demand for U.S. farm-raised fish should continue for the next 30+ years as the world population is expected to reach 9 billion people to 2050.”

Home cooks will enjoy learning that Barramundi Seabass is not a “fishy fish” and won’t leave an odor in your kitchen. Moms will like knowing there are no little bones that create choking hazards. Health-conscious Americans will appreciate knowing it’s raised without antibiotics or hormones, and specially formulated feed ensures that every bite is free of mercury.

The Lenten season is a perfect time to experiment with new fish recipes like Barramundi with Lemon Basil Sauce from Hy-Vee. Click here for additional recipes from Iowa’s First, the fish farm in Webster City that raises fry for Buckeye Fish.

Kosher salt and pepper, to taste

Season fish with lemon pepper. In a large skillet over medium-high heat, cook fillets for 3 to 4 minutes with skin side up in olive oil. Flip over and cook for 2 to 3 minutes, depending on thickness, until flaky and opaque. Transfer the fish to each of 4 plates and keep warm. Return pan back to the stove.

Place the butter and garlic in the pan and cook over medium heat for 1 to 2 minutes, until garlic is fragrant. Add flour; mix until all incorporated. Add lemon juice, white wine and basil and cook until slightly thickened. Salt and pepper to taste.