“I Never Thought It Would Happen to Me”

I thought I’d be done combining corn by now, but… 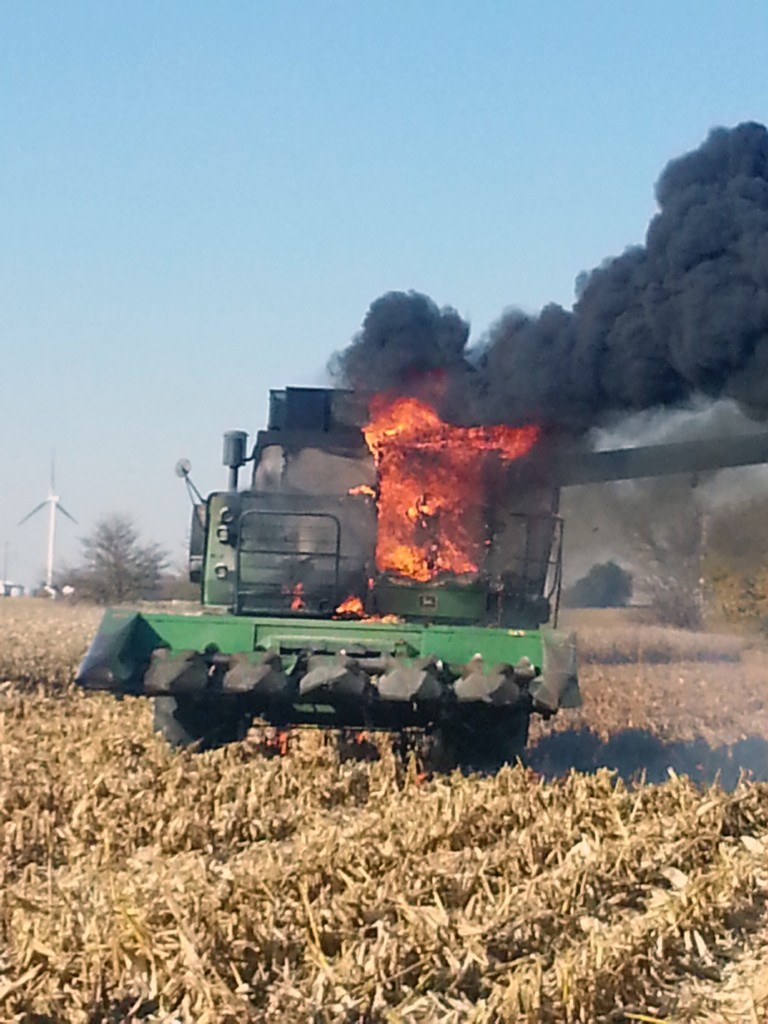 Nothing brings harvest to a halt like a smoking combine! Honestly, I thought I was doing everything possible to prevent a harvest fire. I carry a leaf blower to keep the combine free of chaff and dust, and I carry a big fire extinguisher. But neither was enough to tackle the flames that engulfed my combine last Wednesday.

My wife, Janice, took over running the combine while I drove over to my hog farm to do chores. I was on my way back when I received a frantic phone call from Janice, saying the combine was on fire. Thinking a bearing was probably going out and a little chaff burning, I told her to use the extinguisher. She told me she was calling 911.

Suddenly, my pickup learned how to fly! It didn’t take long to see why Janice wasn’t trying to put out the fire. Smoke and flames were boiling out of the engine beside the cab. I slid in beside the ladder and grabbed the extinguisher and then ran to the engine side. The wind was blowing from this direction, so I could get close enough to spray some powder on the flames. I thought I was gaining on the fire when the powder ran out.

Talking about feeling helpless! Now all Janice and I could do was watch – and use our phones. I used my phone to call the insurance agent. Janice used hers to document the fire.

After a few minutes, I began to wonder why the fire department that is only four miles away in Bradford was not arriving. Because we used a cell phone to call 911, the call went to a different fire department. As time went on, many firemen arrived. The combine was toast by that point, but the corn stalk fire was moving fast. The wind blew the fire away from the standing corn, and the firemen contained the blaze.

I must give Farm Bureau Insurance credit for doing a great job. An adjuster called right away, and when he came out to view the combine, he made sure he did everything possible. He would have done more, but unfortunately I’m a cheap old farmer and didn’t carry as much coverage as I should have. (Did I mention that I took precautions, so I never thought a combine fire would happen to me?) I have already received a settlement check and it hasn’t even been a week!

The outpouring of support has been amazing, too. I posted a picture on Facebook (#felfie of me in front of our charbroiled combine), and Janice posted a video. That video has been viewed about 20,000 times… yes, twenty thousand times! 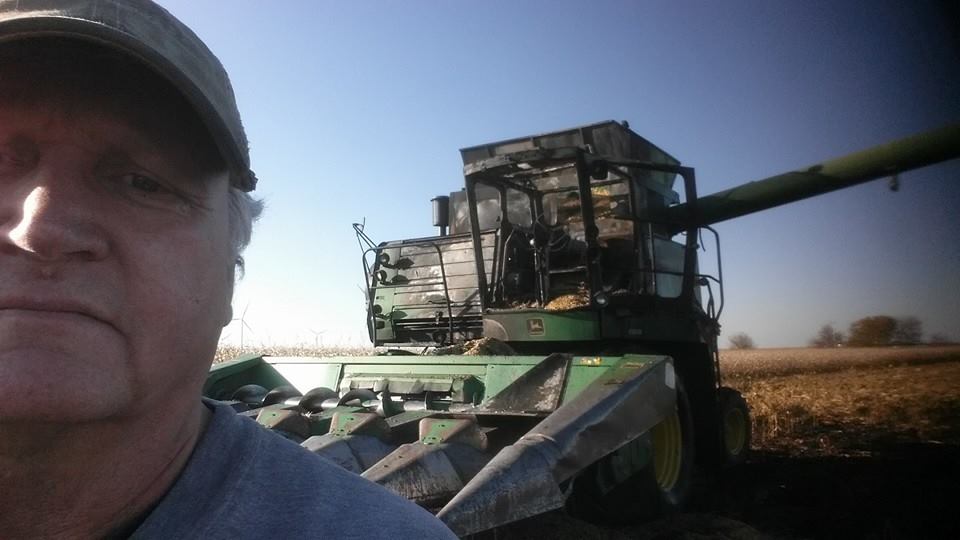 Offers of help poured in, and neighbors and friends have showed so much concern. The next day I was able to borrow a combine from a good friend, who was done with his harvest. The insurance adjuster gave me the okay to see if the grease seals would hold on my old corn head. There didn’t appear to be any serious damage, so we got my corn head mounted on the borrowed combine and started harvesting corn. This newer machine has been a dream. Janice even let me drive a little! My dog, Tucker, is enjoying the buddy seat. In fact, he’s probably getting a little too comfortable in that seat!

It’s been an emotionally draining week, from the lowest of lows to the highest of highs. Sometimes the good Lord just needs to give a person a wakeup call, and remind him about what’s important. We’re so thankful no one was hurt in this fire! All of our equipment can be replaced, and I might even end up with a little nicer combine now. (So many people have given me leads on used combines for sale!) Plus, I’ve been reminded of just how generous and caring people can be here in the Heartland. #Harvest14 will soon be in the books. In the meantime, stay safe my friends!

P.S. Remember to vote today! Rural America’s vote is important to preserve our livelihoods and our freedoms.