Sometimes the late bird can still catch a worm

An article published on wallacesfarmer.com this week highlighted that there’s still time to test soil for the presence of soybean cyst nematode (SCN). The small, plant-parasitic roundworm feeds on roots and can cause significant yield losses, especially in dry growing seasons. 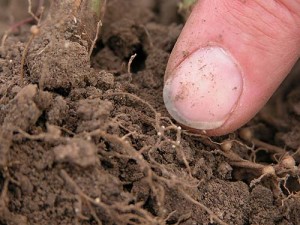 While SCN is a devastating pest, its risk is often overlooked because SCN damage isn’t readily apparent during growing seasons with excess moisture. SCN is an incredibly persistent pest, however, and adequate moisture or not, has the ability to live more than a decade in infested soils without the presence of soybeans, and produce more than three generations in just one growing season.

In a recent Iowa State University Integrated Crop Management article, Greg Tylka, with the Department of Plant Pathology and Microbiology, highlighted the need to remain offensive against SCN, this year especially.

“As we approach spring planting season, increased vigilance about SCN is warranted for the 2012 growing season because of the dry soil conditions statewide,” Greg said. SCN can cause substantial yield loss to susceptible soybean varieties under dry soil conditions, even when SCN egg population densities are low. If soybeans will be produced in 2012 in fields infested with SCN, high-yielding, SCN-resistant varieties should be grown.”

For more information about SCN, and to find tips for collecting a soil sample to detect whether or not it’s present in your field, visit http://farmprogress.com/wallaces-farmer-story-still-time-check-fields-scn-9-57633.