Cast Your Vote for Agriculture 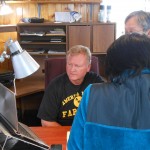 Larry Sailer with the crew in his home office

It’s election day!  Hopefully, you’ve made a list of the issues are most important to you and have studied how each candidate stand on agriculture. The rural vote is extremely important given such a close election.  The Farm Bill, ethanol and estate taxes are just a few of the hot-button issues with farmers.

Because I’m truly concerned about how the outcome of this election could affect my livelihood, I’ve spent quite a bit of time this fall answering questions from members of the media.  Reuters talked to me by phone. Fox News came to my farm during harvest.  I also spent parts of three day during fall harvest with a video crew from the NHK network from Japan, which I understand is comparable to our public TV.

It amazed me how these media found an old hog farmer in North Central Iowa, so I asked.  A producer from New York said he listened to an interview I did with National Public Radio.  Fox Network said my name kept popping up during Google searches.  Oh, the power of the Internet! 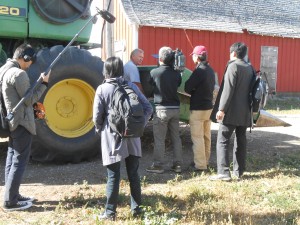 NHK collected hours of video for a documentary about our political process.  It seemed to me that these Japanese were more interested in the politics shaping our future than many of my fellow Americans!  They asked me about my concerns and why I believe there is a need for compromise.  Over the course of three days, I answered many of their questions.   They wanted to know how the Farm Bill affected my farming operation and how my crop insurance worked. 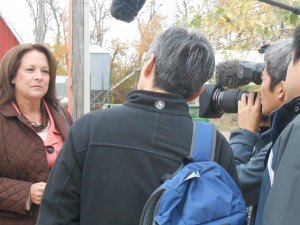 The Japanese also wanted to know how I work with my elected officials, so I contacted Rep. Annette Sweeney.  Annette was very gracious and came to my farm, so she could be a part of this interview.  Annette’s farming experience, combined with her position as Iowa House Ag Committee Chair, made for some great discussion.

As you can see in my video, we had a fun time.  This segment aired last Thursday on Japanese TV.  While I haven’t actually timed it, it appears they used about two minutes from the hours and hours of videotape.  So was it worth it? You bet!  It was a great experience talk with people from another part of the world, who had a totally different perspective than mine.  It also reminded me how fortunate American are to have the right to vote.  Remember, exercise your right to vote today!