“Compromise” Becomes the Mantra this Season 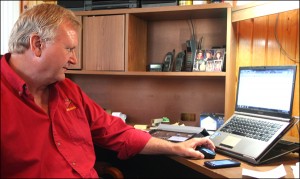 Larry Sailer is constantly connected to ag news and market information via his smartphone, iPad, office laptop and piles of newspapers at home near Iowa Falls. Photo Courtesy of IFT Photo by Zoe Martin.

It seems that I’ve had to do my share of compromising over the past two weeks.  I should have been focused on getting my crops harvested, but major media outlets wanted me to take time to meet with them and discuss everything from how corn is grown to how my business is affected by the Farm Bill – or lack thereof.  Just as soon as I got my combine rolling smoothly, it broke down and I lost another day of prime harvest time.  Once again, I found myself having to compromise what I wanted to get done with what the repairman could get done.

Regardless of your profession, I’m sure you can emphasize with my situation.  There is progress to be made but you find yourself stymied by the current events.  My own corner of the world seems to be paralleling what’s happening on the national level.  Each day – as the election draws nearer – there are several news reports and advertisements reminding us of how two opposing sides are unwilling to settle and reach an agreement.

Politics are mired in a standoff between our two main political parties.  The Left thinks we need to spend to expand the economy through more spending.  The Right thinks we need to cut spending and reduce restrictive regulations. My concern is that if the United States doesn’t get its deficit under control, it won’t matter who’s on the Left and who’s on the Right because we simply won’t be able to help the people who need it most.  Food, shelter and education for a future job should be the basic goals.  I also believe education is key to helping others help themselves.  Other folks believe cell phones should be added to the list of “basic necessities.”  It’s obvious that some compromise must be reached – and soon.

Such issues return my thoughts to the 2012 Farm Bill and to the Food Security Act.  An article in The Des Moines Sunday Register on Oct. 14 quotes the 2001 World Food Prize Recipient as saying that “the problem is not that the world is running out of food but that many people lack access or knowledge about how to grow it.”

Food stamp rolls have soared 18.5 million since 2008 to a record 46.7 million people, according to that same Register article.  About one in seven Americans now receives government help to buy food.  The U.S. Department of Agriculture (USDA) reported last month that Americans are having a harder time getting food than ever before as the economic downturn continues to weigh on households throughout the country.

While it’s a challenge for Congress to pass a Farm Bill that includes food stamps and ag subsidies, one could make the case that there is a natural tie between farming and food security.  Farming, after all, produces mainly food.  Farming also produces other useful products like cotton for clothing, pig heart valves and ethanol to name just a few.  Agriculture is a huge renewable economic machine.  (“Renewable” is a key word here.)

America needs agriculture!  That’s why it’s imperative to bring the U.S. budget under control.  Everyone loses if we hit the fiscal cliff that is getting closer and closer.  Let’s compromise and move this country forward.  It’s time to find solutions to some very big problems.  It’s time for some compromise!