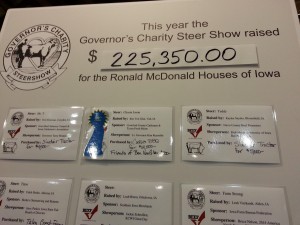 Records were made to be broken, and a fund-raising record set last year was shattered Saturday during the Iowa State Fair.

The 2014 Iowa Governor’s Charity Steer Show raised $225,350.00 for Ronald McDonald House Charities, which serves families whose children are hospitalized with serious health issues in one of these three Iowa cities: Sioux City, Des Moines and Iowa City. Money raised at 2014 show and sale bested last year’s record of $183,000. More than $2.2 million has been raised for Ronald McDonald Houses of Iowa since 1983 when Gov. Terry E. Branstad first joined forces with the Iowa Beef Industry Council to sponsor the Governor’s Charity Steer Show. 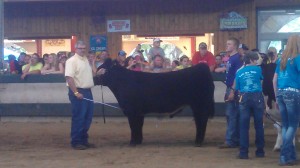 Congratulations to Kendrick Suntken of Belmond, whose steer was selected during the 2014 Franklin County Fair for the Governor’s Celebrity Steer Show at the Iowa State Fair. Kendrick, wearing the purple shirt, is pictured here with Alan Brown, president of the Iowa State Fair Board, who showed his steer in last Saturday’s show.

Congratulations to all of the Iowa youth whose steers were selected for this year’s show! It takes a partnership between the youth, who raise and show these cattle, sponsors and buyers to contribute to such a worthy cause. Latham Hi-Tech Seeds is proud to help sponsor the steer owned by Kenderick Suntken.