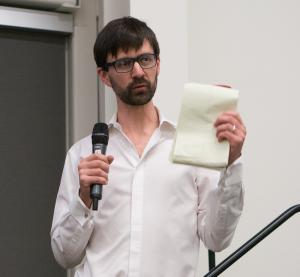 Reposted with Permission
Click Here for the Original Source

Journalist and author Nathanael Johnson was skeptical of genetically-modified organisms (GMOs) when he began a six-month investigative series about their use in food production. He opposed what they stood for, not necessarily that they were unsafe.

Twenty-six stories later, the food writer for Grist – an online environmental magazine based in Seattle, Grist.org – has a different view.

“What’s the fuss all about?” Johnson now says with conviction, throwing up his hands.

Johnson talked about his research and findings Monday during “An Evening with Nathanael Johnson,” hosted by the Iowa Food & Family Project. The event was held at the Iowa FFA Enrichment Center in Ankeny.

“In the end I ended up figuring out that GMOs aren’t necessarily going to save the world but they aren’t a problem,” Johnson said. “It’s a useful tool.”

Grist editors tasked Johnson with thoroughly exploring all aspects of GMOs, which continue to be a polarizing topic worldwide and in Iowa. Most of the soybeans and corn raised in the state and fed to livestock are genetically altered to kill or resist pests, withstand herbicides, better tolerate drought and for other reasons.

Boisterous factions exist on both sides of the GMO issue. Detractors believe they are unsafe, hurt the environment and only benefit large agricultural corporations. Johnson, who was raised in California in a household that held natural, organic and local food in high regard, once opposed the technology because it was “part of an industrial complex that we dislike.”

GMO advocates and many researchers, on the other hand, say extensive testing proves the technology is safe. It will help farmers grow more food in an environmentally friendly, sustainable way.

About 150 people — farmers, foodies, students, agribusiness officials, etc. — attended the event, which featured Johnson talking about GMOs and his conclusions, a panel discussion with local farmers and a question and answer period.

“Food purchasers are keenly interested in the subject of food and how food is grown, including improved plant genetics. Nathanael’s series of columns focusing on the subject of genetic modification provided a unique perspective from a respected author,” Putze said.

That’s why Tara Ely of Grimes attended the 1 1/2–hour event. With Johnson’s book, “All Natural: A Skeptic’s Quest to Discover If the Natural Approach to Diet, Childbirth, Healing, and the Environment Really Keeps Us Healthier and Happier,” in hand for him to sign, Ely also wanted to get his views on GMOs.

Like Johnson, Ely said she was leery of genetically modified food. But after listening to Johnson and local farmers, she doesn’t have a problem eating them. She especially found Greg Rinehart’s views on growing GMO sweetcorn interesting. The Boone farmer said he uses less insecticide to keep pests, like worms, from ears he sells at the Downtown Farmers’ Market in Des Moines.

“I wanted to come because I have a passion for natural food and learning all I can about what I’m putting in my body,” Ely said.

A cautious and questioning person by nature, Johnson said at some point society has to move on and trust science. He explored health, environmental, social, scientific, agronomic and numerous other aspects of GMOs.

Exhaustive research, countless interviews with scientists and government officials and talking with people on both sides of the issue all led to the same conclusion.

“If I want to be on the side of science, I had to accept (GMOs) are as safe as science can suggest. I don’t know if it’s worth the passion that gets poured into it,” Johnson said.

Ultimately, he said a lot of fact-finding didn’t matter because much of the skepticism and fear of GMOs comes from the great disconnect between “eaters,” as Johnson likes to call consumers, and production agriculture. The vast majority of Americans, including people in the Heartland, are several generations removed from the farm.

“(People) are fundamentally alienated from their food supply. They want their food dollar to make the world a better place, and they are not convinced (GMOs) will,” Johnson said.

Farmers and commodity organizations need to continue to tell the story of agriculture and relay how food is grown, said ISA Board member Cliff Mulder. The soybean and corn grower from Pella said it’s a slow process, but a critical one.

Mulder said he was impressed with Johnson. He had limited knowledge of agriculture, but was willing to take the time to understand the topic.

“He came into it thinking GMOs were bad but was open minded enough to be convinced by science that they were not,” Mulder said. “I would hope we, as a board and producers, will continue to work to convince others that the food we grow is safe.”

Amanda Rinehart, a communications specialist with DuPont Pioneer in Johnston, said Johnson provided insight into “real” questions consumers have about their food and how and who produces it.

“It’s refreshing to hear from a consumer who truly wants to better understand the food and ag system and take others along on his journey,” Rinehart said. “I hope everyone in attendance walked away with motivation to tell their own food and ag story.”

Ely said she will.

“I will go back and talk to co-workers,” she said. “(Nathanael) provided a lot of things to think about.”

Follow this link for another story related to Johnson’s visit to Iowa: http://www.iasoybeans.com/TheBeanBlog/?p=1033