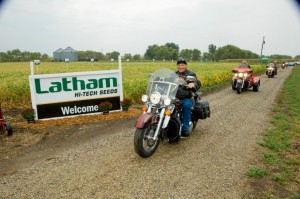 More than 100 people donned rain suits and motorcycle boots for Latham’s Fourth Freedom of Independence on Saturday, Aug. 25. Rain began to fall as the first group of riders left for Latham’s atypical field day on wheels, but no one complained after a growing season plagued by drought.

The five-hour tour took riders across 90-miles through North Central Iowa where they visited three Latham® corn and soybean showcase plots. A walk through Latham’s “living museum of corn” demonstrated the differences between corn managed as it was in the 1930s compared to modern-day 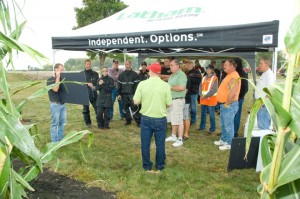 hybrids.  Tour-goers also had a chance to see kernels of all sizes and colors, plus one ear as big as a Pringle® potato chips!

A highlight of the days was a stop at Hagie Manufacturing in Clarion where riders got a hands-on look at advanced manufacturing in Iowa. Interestingly enough, the Hagie’s family business got its start as a hybrid corn company and made history when Ray Hagie invented the world’s first self-propelled sprayer in 1947. 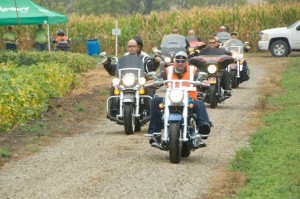 The ride ended with a complimentary hog roast catered by Wholly Smoke BBQ of Dows, Iowa.  Thanks to all of the “die-hards” who made the 4th Annual Latham Freedom of Independence Ride another roaring success!

Remember to mark your calendars for the last Saturday of August 2013. Help us celebrate Latham’s milestone 5th Annual Freedom of Independence Ride in Loess Hills, voted one of Iowa’s most scenic motorcycle routes.