Welcome to the Houses that Beef Helped Build

“The power of love is a curious thing,” croons musician Huey Lewis.  “It makes one man weep, another man sing.”  And in Iowa, love helps build Ronald McDonald Houses.

Welcome to the House that Love Built.  The Ronald McDonald House is a warm, safe and comfortable place where family members of seriously ill children can stay while their children are being treated at area hospitals in Des Moines, Iowa City or Sioux City.

Ronald McDonald Houses rely on the love, sharing and caring of generous donors to accomplish its mission.  Last Saturday, during the 2013 Iowa State Fair, a record-setting $183,000 was raised from livestock sales held after the 31st Annual Governor’s Charity Steer Show.  More than $2 million has been raised for Ronald McDonald Houses of Iowa since 1983 when Gov. Terry E. Branstad first joined forces with the Iowa Beef Industry Council to sponsor the Governor’s Charity Steer Show. 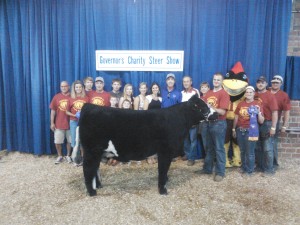 It’s an honor to be asked to participate in the Charity Steer Show, whether you’re a 4-H or FFA member whose animal gets selected or whether you’re the celebrity who’s been invited to lead one of the 1,000+ pound-animals around the ring.  It’s an opportunity for Iowans of all backgrounds to come together to support a worthy cause.

“It was certainly an honor to be asked.  My family has used the Ronald McDonald House in the past, so it was a great chance to give back.  But I have to admit, I was a little nervous,” said 1040 WHO Radio farm broadcaster Mark Dorenkamp.  “The pavilion was packed full of people, and I’d never shown a steer before.  There were a few moments when I didn’t know if I’d be able to keep Beef Wellington from taking off, but I had a great young man from Madison County helping me.  Brock Johnson was with me every step of the way, and getting to know the Johnson family was a real highlight for me.”

“What a fun event!” said Story County 4-H and FFA member Cory Sampson of Nevada, who also participated in the charity show for the first time this year.  “We helped raise money for an awesome cause.” 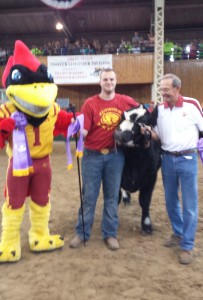 Cory teamed up last Saturday with Coach Cecil Rhoads in memory of Brayton Shill, who would’ve turned 8 on July 29.  Brayton lost his battle with cancer last November, and his family stayed in a Ronald McDonald house while he underwent treatment.  The team spirit exhibited by Cyclone the steer, Coach Rhoads and Cory made them the People’s Choice Award Winner.

Teamwork is second nature to Cory, 19, who was raised on a family farm near Nevada.  He’s the youngest son of Doug and Diana Sampson, who are also the proud parents of 25-year-old Todd and 22-year-old Amy.  All three of the Sampson’s children have been active in 4-H and FFA.  Doug and Diana were both 9-year 4-H members.

“There isn’t a better way to learn life skills or make new friends than through 4-H and the FFA,” says Diana.  “Our kids have developed leadership and communication skills.  They held multiple offices within their local 4-H Club and the Iowa Junior Maine-Anjou Association.  Each of our kids took part in the annual FFA contests.  Plus, they’ve exhibited livestock through both 4-H and FFA.”

“Our kids have enjoyed success in the show ring, but the neatest thing to see is the endless friendships they have made and will have for years to come,” says Doug, who began farming full time in 1977 with his father, Glen. 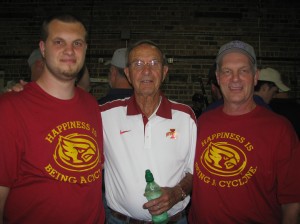 Now that Glen is retired, Doug, Diana and their kids raise corn and soybeans.  They have a 25-head cow/calf herd of Maine-Anjou cattle.  They also partner with Diana’s cousin to farrow 60 head of sows mainly to be sold as show pigs.

To promote the quality meat products they help produce, today the Sampsons are sharing a family-favorite recipe for meatballs.  Form small meatballs and serve them on a stick if you want to enjoy them “state fair style.”  Otherwise, follow the recipe below to make 15 large meatballs.