John Latham’s Term as ASTA Chair Ends with a “Bang”

Approximately 100 industry leaders from across the United States gathered in our nation’s capitol and another 100 gathered online for ASTA’s annual Policy and Leadership Development Conference (PLDC). In fact, ASTA made news for becoming the first agricultural group to meet in Washington, D.C., in more than a year, writes Jerry Hagstrom in his National Journal column. The meeting shows that gathering in Washington is still worthwhile. 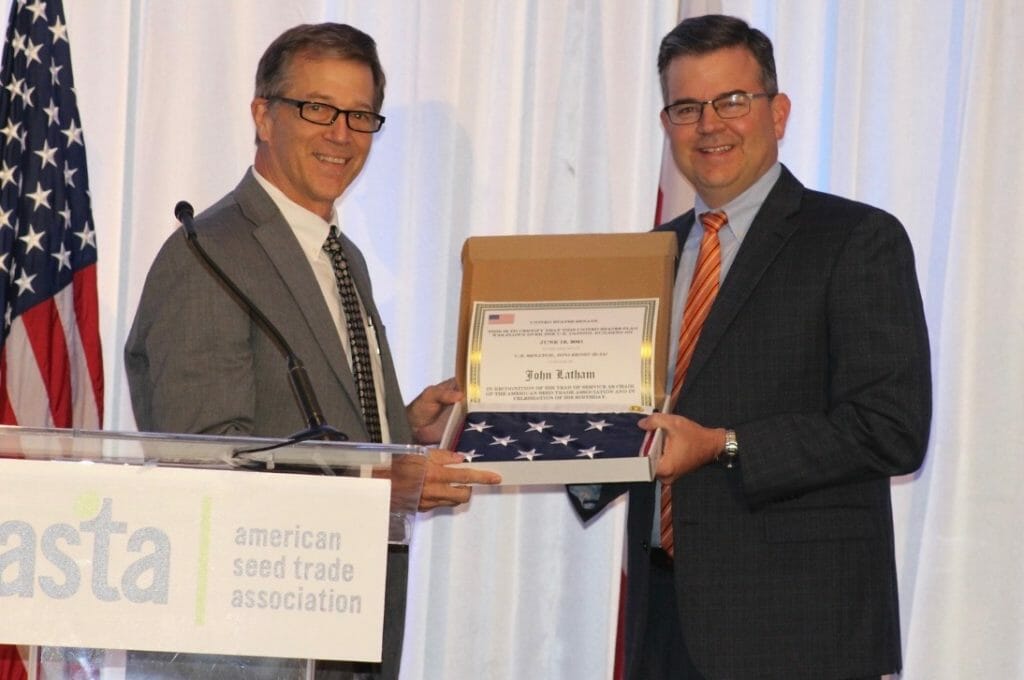 In appreciation for his year of service, incoming ASTA Chair Brad May presents John Latham with a flag that flew over the U.S. Capitol on John’s birthday.

“It’s so good to be back together as an industry, a community, and as friends,” Latham said in his opening remarks on Monday, June 21, 2021. “The past year was far different than any of us could ever have imagined. Despite the challenges, it has been such an honor to serve as chair of the American Seed Trade Association during this truly unprecedented time.” 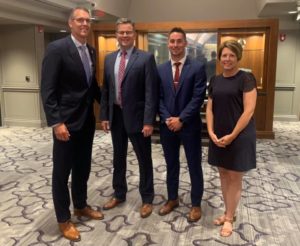 Congressman Feenstra of Iowa’s Fourth Congressional District addressed ASTA members on the importance of telling the story of agriculture. He is pictured (left) with John, Ian and Shannon Latham during the meeting.

Latham continued, “I am most proud that we kept the association business moving forward during the pandemic. ASTA board members updated the existing Strategic Plan and added Sustainability as its own pillar. After all, ‘sustainability’ is a part of everything we do – it always has been! Sustainability is a key to telling the story of how the seed industry helps feed the world while protecting, improving, and replenishing our resources for future generations.”

Congressman Feenstra of Iowa’s Fourth Congressional District reiterated the importance of telling agriculture’s story. In his address to ASTA members, he said, “We (in agriculture) have a story to tell.” Feenstra went on to say he is thrilled to tell ag’s story as a member of the House Ag Committee. He also serves on the House Committee on the Budget, as well as the House Committee on Science, Space, and Technology.

Visiting with members of Congress is one important component of the annual ASTA meeting, and association members traditionally visit their respective state’s congressional delegations on Capitol Hill. However, most legislative visits this year were conducted virtually. Seed industry leaders talked with elected officials about sustainability, innovation, and trade issues.

In addition to legislative advocacy efforts, the 2021 PLDC agenda covered timely business topics. General sessions and panel discussions ranged from how to attract more minorities and how to advance women to reopening offices. Concerns also were raised about how legislation and regulation could hamper the seed industry. 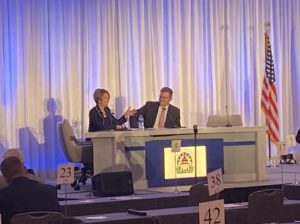 John Latham facilitated the “Women in Seed” discussion which included Shannon Latham as a panelist.

To help quell those fears, USDA Deputy Secretary Jewel Bronaugh said on a live video chat that “it all begins with the seed.” (“First the seed” is ASTA’s motto and the name of its foundation.) The Deputy Secretary also said she hopes the success of the COVID-19 vaccine leads to renewed faith in science.

“We can’t pick and choose which science we like,” said Bronaugh. This was welcome news to the seed industry, which fears science skeptics will halt the innovation of seeds.

The importance of seed innovations will continue to be a key message communicated by ASTA members. Because there is a new administration in the White House and many new members of Congress, Latham stressed the importance of building relationships. “Never doubt the power, and necessity, of our strong collective voice,” he said as he addressed ASTA members during a general session.

Legislative priorities for ASTA include:

Keeping with tradition, Latham hosted a Chairman’s Dinner on the last evening of the annual summer ASTA conference. The event was held at the newly opened The Point with a waterfront view. Because Washington, D.C., is known for its crab cakes – and crab cakes were served at the Chairman’s Dinner – today we’re sharing with you a recipe, so you can make these delicacies at home. Bon Appetit!

Recipe by "Dining by Fireflies" cookbook

Combine all ingredients in medium bowl. Chill until mixture thickens.

John Latham’s Term as ASTA Chair Ends with a “Bang”