The proposed ban on Rice Krispies® in schools is just one more example of unrealistic rules being created by the Obama administration.  Because Rice Krispies aren’t sugar coated, I had to do some digging to find out what makes them so disagreeable to rule makers.  Here’s what I uncovered:

… the cereal’s first ingredient, refined rice, is neither a vegetable nor a whole grain.  Items have to be one of those categories — or a fruit, dairy product or protein food or a combination that contains at least 1/4 cup of fruit or vegetables. If it’s not one of those, it can slip by if it contains at least 10% of the recommended daily value of calcium, potassium, vitamin D or fiber. But those nutrients have to be naturally occurring. Rice Krispies doesn’t meet that standard either because it’s fortified with vitamins and minerals…  But Baked Lays would pass the test because potatoes are considered vegetables. Fried chips, however, wouldn’t because of their higher percentage of calories from fat. 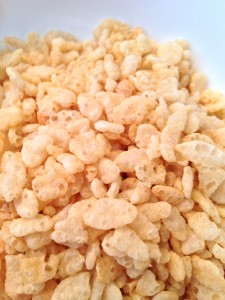 So, “crisp rice” is neither a whole grain nor a vegetable.  Even though Rice Krispies rates a 57 on the completeness score for nutrition – which I might add is pretty good for a breakfast cereal – new school rules would make Baked Lays a better choice than Rice Krispies for breakfast.

It’s also interesting to note that it will take an additional 926,935 hours per year for local and state administrators to comply with the proposed new school lunch rules.  That’s more than 100 years’ of time!  If these rules get implemented, adding this many more hours to payroll would create even more pressure on belts that have been tightened by budget cuts.

This leads me to the subject that I really want to dig into, which is the federal budget and Sequestration.  My mind is filled with questions:  Where did the USDA get money to research and then propose all these school lunch rules or was a study even conducted?  How were these proposed changed decided and by whom!  From the facts I found through a quick Internet search on “school lunch rules,” and “meat inspector furlough,” I’m also questioning whether USDA officials have even heard of a search engine!

U.S. Secretary of Agriculture Tom Vilsack was quizzed last week by U.S. congressmen.  They asked why he would furlough certain needed workers but not others.  Sec. Vilsack answered that his hands are tied, and he claims the law was written in such a way to make it as drastic as possible.  No leeway?  Really.  I’m not believing it!  If that were the case, Congressmen wouldn’t be questioning Vilsack’s decisions.

Potentially shutting down the meat industry and threating a meat shortages this summer is certainly drastic!  Yet, there are all kinds of other USDA program that seem to be unaffected by sequestration.

In AgriNews on Jan. 23, 2013, Sec. Vilsack talked about the USDA Rural Development’s investments in job creation, businesses, infrastructure and housing in rural communities.  This one arm of the USDA has a portfolio of $176 billion dollars in loans and grants.  Most likely, this budget includes some unessential programs that could be eliminated and a few other programs that could be downsized, so the USDA could cut spending without shutting down the meat industry or causing food safety concerns.

The Inspectors General, a Washington-based watchdog group, points out there is an easy $67 billion to be saved in government spending.  This $67 billion in “rampant waste, fraud and abuse” would cover most of the $85 billion being cut by the sequestration, which is making extremely painful cuts.  Even this cut is such a small part of the yearly spending, that it does not even make a dent in the deficit.

Common sense must be restored!  Please join me in contacting elected officials to let them know how you or your family members – your livelihoods – might be impacted unless they restore sense to school lunches, pass the Farm Bill or end the meat inspector furlough.  As I was reminded this past weekend at the Iowa Ag Leaders Forum, it only takes a handful of constituents to get a legislator’s attention.

“Constituents give truth to what lobbyists are working on and saying,” said Dale Moore, Executive Director of Public Policy for the American Farm Bureau.  Together, we can make a difference!