Not All Heroes Wear Capes… Some Donate Life-Saving Organs 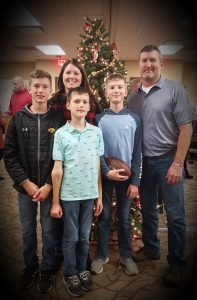 It runs in the family.

Marianne (Squires) Nielsen of Greene, Iowa, is as good of a cook as her mother. They share the same color of hair and eyes. Marianne also inherited her mother’s Polycystic Kidney Disease (PKD).

“I found out that I had PKD during an ultrasound when I was pregnant with our oldest son,” says Marianne, who is a registered nurse at MercyOne Cancer Center in Mason City. Her husband, Chad, is an electrician at Sukup Manufacturing in Sheffield. They’re the proud parents of three active sons: Sean, 14; Cain, 12; and Will, 11. The boys attend North Butler Community School where they are active in sports and Boy Scouts.

Because she been treated for hypertension since she was in her early 20’s, it was one indication that Marianne probably had inherited polycystic kidney disease. Other risk factors for PKD, according to the Center for Disease Control, are high blood sugar levels and being overweight.

Doctors carefully monitor people with a history of PKD. Marianne’s maternal grandmother was on dialysis for about 14 years. Her mom also has PKD, although she hasn’t needed dialysis or a transplant. Two of Marianne’s first cousins have had kidney transplants. One of her aunts and a great aunt have multiple children and grandchildren with PKD and have had transplants.

Marianne’s kidney function was monitored every 6 months for about 13 years. As her kidney function decreased, her creatinine levels steadily rose. She was referred to Mayo Clinic’s transplant team in April 2019, but she wasn’t placed on the organ waiting list until later that summer. After being told it would be a three- to five-year wait for a cadaver kidney, Marianne appealed to the public for help.

A large pool of family members and friends signed up to help Marianne via Mayo’s website. Many of them requested to be tested to see if they were a match to be her donor. Marianne’s oldest sister, Jennifer, was tested first because the two have the same blood type. She was declined, but Marianne’s youngest sister was accepted. 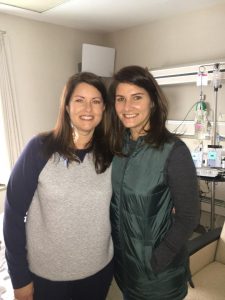 “Due to her excellent health, Becky was approved to be an organ donor. We were placed on the Mayo Paired Donor program on August 31. On January 2, 2020 – exactly one year after my first appointment at Mayo and on my middle son’s 12th birthday – I received the call that a match had been found for both Becky and me!”

Marianne received her new kidney on January 23, 2020. After three days in the hospital, Marianne was discharged to the Gift of Life transplant house. This non-profit, which runs completely on donations, provides a clean and affordable living environment for transplant patients and their caregivers to stay locally while they’re receiving follow-up care.

“There are no words to describe what Becky’s gift means to me,” says Marianne. “Becky told me that it wasn’t a hard decision for her. I will never forget that moment, and I get tearful every time I think about it. Her gift and that of the Good Samaritan, the living donor whose kidney I received, have changed my future.”

Without a kidney transplant, Marianne says her life would have been planned around the eight to 10 hours each day of peritoneal dialysis at home or trips to the hemodialysis center three days each week. Between driving to Mason City, working and dialysis, she would have had very little time to spend with her husband and their sons. She would have missed attending many of their activities. Plus, visits away from home would have been very restrictive as she would’ve had to take all the boxes of equipment and machine with her 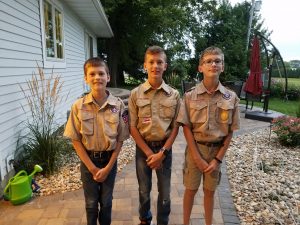 “I watched my grandmother faithfully go to dialysis three times a week for 14 years. My sister and my donor have saved me from that future! I will not have to miss activities like my sons’ ballgames, Boy Scout events, date night with my husband, or time spent with friends due to my sister and my donor’s generosity. It is literally life-changing!

As they say, not all heroes wear capes… some have a kidney they are willing to spare.

“You can live with one kidney, so ‘share your spare’!” encourages Marianne. “I would like people, who have been diagnosed with kidney disease, to know there is hope. I would like others to know that you don’t have to be a match to donate a kidney to a friend, a loved one or even to a stranger. Transplant programs can develop chains of matching people. After all, my kidney came from a Good Samaritan!”

The actual kidney surgery is generally covered by the recipient’s insurance. If you have other financial worries, the National Kidney Foundation will reimburse lost wages and cover the cost of meals, mileage and hotels.

After being on a restricted diet for so long, Marianne said she looks forward to once again enjoying pizza and popcorn night with her family. She still tries to limit her sodium intake to 2,000 milligram daily, and she doesn’t add salt to food.

In celebration of her successful kidney transplant and National Donate Life Month, today Marianne is sharing with us a favorite recipe for Creamy Chicken Wild Rice Soup.

Sauté the onion, celery, carrots in butter.  Add flour and cook until bubbly.  Add the chicken broth and bring the mixture to a boil for one minute.  Reduce heat and add remaining ingredients.  Simmer for 20 minutes.