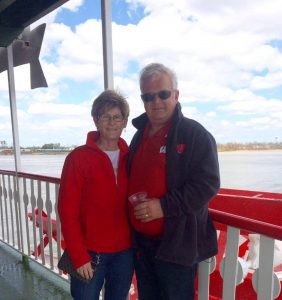 Farmers have an uncanny ability to recall the dates of weather and other life-changing events for every year of their farming careers. Owen Storlie will tell you the past three springs have been the most challenging of his life – and it’s not due to the record low temps in May 2016 nor the foot of snow that fell across the Midwest in April 2018.

Owen operated K & S Kustom Service, Inc. and ran his family’s 125-year-old farm located in Deerfield, Wisconsin. After 25 years in agribusiness, he sold his fertilizer, chemical and seed dealerships. Not one to idle, Owen retained ownership of his grain trucking fleet. He continued to operate 400 acres of cropland and was looking forward to semi-retirement.

Owen and his wife, Caroline planned to enjoy the winter months in Mississippi.  They enjoyed life to the fullest for three months and then their R & R came to an abrupt end.

The snowbirds were winding down their trip and packing up the RV in March of 2017 when Owen’s health went downhill fast. He gained about three inches on his waist line and his energy level decreased immensely. He visited the local clinic where a paracentesis, or an abdominal tap for fluids, was performed and 6 liters of fluid were removed. Doctors advised him to make immediate plans to see his family physician upon returning home, but they never once mentioned this was the start of a serious issue.

Upon returning home, Owen met with doctors at the UW-Madison Hospitals. He was diagnosed with NASH (Non-alcoholic Steatohepatisis), an advanced form of fatty liver disease.  Every week he traveled to Madison to have the paracentesis performed as he continued to retain fluids in his abdomen. 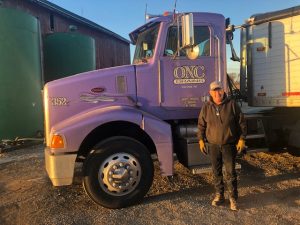 After extensive testing, Owen’s daughter was cleared to be a partial liver donor. He was admitted on November 2, 2017, for the procedure. However, his health declined immediately to the point where it was no longer an option to receive a partial liver and a full liver was needed. He was placed on the transplant list. Then he contracted a bacterial blood infection and pneumonia, and he was removed from the transplant list.

Owen’s health continued to decline. His blood pressure (BP) plummeted to the point where he needed a machine to keep his pressure viable. During this time, the doctors and staff notified Owen’s family that his organs were “shutting down” and gave him 12 to 36 hours to live.

“That was on Wednesday evening. By the grace of God and Owen’s determination that it was not his time yet, his BP rose through the night and into the morning to the point where he no longer needed the help of the machine,” says Owen’s wife, Caroline. “All the numbers were just enough to put him back on the transplant list late in the day on Thursday, but the doctors weren’t real optimistic of a good outcome. Then in the early morning hours of Friday, the call came that a liver was available. This was truly a miracle as Owen was on the list less than 10 hours.”

On December 22, 2017, the Storlie family received the best Christmas gift ever as Owen underwent a grueling 14-hour procedure. Shortly after the liver transplant, his kidneys weren’t functioning to their potential and Owen was placed on dialysis while he was in the hospital.

That February, Owen was transferred to the UW Rehabilitation Hospital.  He had to learn how to walk and how to eat again. Because he had been in bed for so long with so many tubes, he lost muscle along with weight. Owen weighed 229 pounds when he entered the hospital in November 2, 2017, and he weighed 124 pounds when he was released on February 14, 2018.

The spring of 2018 was very challenging, but thanks to some great friends, the farm ground was worked up. “I wanted to plant so the guys would load the planter for me,” says Owen. “Then I’d call when I needed someone to fill the planter again. They would help me get up into the tractor and we got it all done.”

The 2019 crop will be Owen’s 42nd crop year, and he’s looking forward to getting back in the cab. Friends will help him as his strength isn’t where it should be, but he says it’s more manageable now with an exercise routine.

It’s not uncommon for a liver transplant recipient to need a kidney transplant within five years. His kidneys haven’t made a complete comeback, but the numbers are staying steady. A transplant isn’t on the immediate calendar, but Owens finds comfort knowing that his daughter, Jessica, is a viable donor.

Due to the liver transplant and the likelihood of a kidney transplant, Owen has had to change his diet. Higher levels of potassium in dairy and other foods has forced him to decrease his consumption of some of his favorite foods. He also has had to increase proteins like fish and chicken plus he eats more fresh vegetables.

He’s made other lifestyle changes, as well.

“Now I take the time for family and friends, and that’s probably the biggest change,” says Owen.  “I’ll push when I have to, but I’ll also take off now for our grandkids activities. We really enjoy making it to their basketball and football games along with the wrestling matches.”

Owen and Caroline also enjoy hitting the road with their fifth wheel RV. They spent the first three months of 2019 in Alabama where they celebrated life! Now that they’re back home in Wisconsin, Owen and Caroline are looking forward to the start of the spring planting season. Whether they’re taking a break from work or marking a special occasion, the Storlie family enjoys celebrating with Butterfinger Angel Food Torte. Today they’re sharing this special recipe on “The Field Position.”

Angel food cake, 1 if homemade or 2 if smaller store bought

Cream soft butter and powdered sugar, stir in the beaten egg yolks.  Fold in whipped cream. Mixture should be semi-stiff.

Cover the bottom of a 13 x 9 inch pan or Tupperware with ½ of broken up or sliced angel food cake.  Cover this with ½ of the whipped cream mixture and then ½ of the candy bars, (save the nuts for the top layer).  Repeat layer with nuts and chill overnight.  Can be frozen.