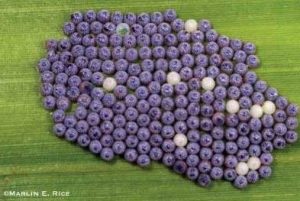 The Western Bean Cutworm can dramatically reduce end-of-season corn profit. The Western Bean Cutworm does not cut stalks but feeds on ears, posing as a threat to grain quality and corn yield. The cutworm moths are gray to brown with a wing span of 1 ½ inches. As a late summer insect, moths first emerge in early July and only one generation is produced each year.

Female moths lay eggs in whorls just ahead of the pollination stage and will lay an average of 50 eggs at a time. Eggs develop over the course of 5 to 7 days. Eggs will first be white, then become tan as they develop and will turn purple once they are close to hatching.

Only a small percentage of eggs typically survive, but larvae that reach full maturity can cause measurable damage to corn.

Pheromone traps can be used to identify Western Bean Cutworm in fields. When multiple moths are caught at a high frequency, scouting for symptoms should take place. When scouting, focus on fields that are close to shedding pollen and examine 20 consecutive plants in 5 different locations. 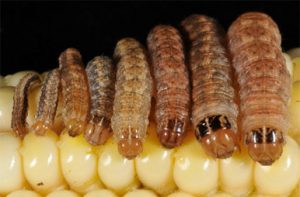 Western Bean Cutworms feed on leaf tissue and silks as they approach the ear where most of the damage is incurred. The Western Bean Cutworm can be confused with other species of cutworm. The dark brown stripes behind their head that appear during the third instar distinguishes them from other cutworms.

The most mature larvae will feed on fully developed ears and can sometimes burrow into the sides of the ear. When scouting, it is important to pull back the husks to fully determine if the cutworms are present.

After feeding on the ears, the larvae will drop to the soil and burrow deep underground where they overwinter. It is common for many larvae to feed on one ear at once, increasing the severity of feeding damage. Ears with multiple larvae can exhibit up to 50-60% in kernel loss.

An average of one larva per plant has resulted in yield loss of 4 bu/acre in Iowa and Nebraska. Aside from yield loss, damaged kernels are prone to mold growth which reduces overall grain quality.

Managing Western Bean Cutworm should take place close to hatching, just before pollination. Once larvae hatch and move underneath tight leaves surrounding the ear, they become difficult to exterminate. Applying a foliar insecticide is recommended when 5-8% of plants have egg masses or young larvae present but not before at least 90% of plants have emerged tassels.

SmartStax, Viptera, and eventually we will have Duracade traited hybrids that provide aboveground protection against Western Bean Cutworm. Though Western Bean Cutworm overwinters, there is no evidence that tillage is an effective way to combat infestation. Be sure to consult with your local Latham representative to design the most effective treatment plan.