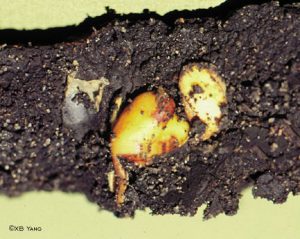 Rotting of soybean stem and root tissue, or “damping off,” can jeopardize stand quality and reduce yield. The Phytophthora fungi can impact seedlings both before and after emergence. Even if seedlings successfully emerge above the soil, they will have poor vigor and slow early growth.

Poor stand is one of the primary consequences of damping off, though replanting may be possible. North Dakota State University research cites that Phytophthora-related yield loss has reached up to 30% in states throughout the Midwest.

Cool weather is a major cause of damping off as it slows germination and stifles growth. Phytophthora thrives in soil temperatures between 70 and 77°F but can also survive in extremely cold temperatures. Warm temperatures, poor drainage and/or clay soils create a susceptible environment for damping off. 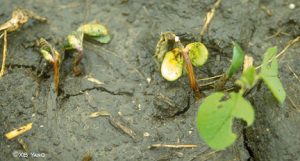 Before seedlings emerge, the fungi can cause seeds to rot. Rotten seeds will appear to be caked in soil with discolored roots. Roots may not be fully developed or even exist.

Wilting can occur in emerged seedlings as the cotyledons will appear brown and saturated. Plants that developed leaves before showing signs of damping off will begin to turn a grayish color before turning brown.

With the overwintering nature of the Phytophthora fungi, controlling the amount of field residue can make the environment less conducive for fungal growth. Also, when planting early or in fields with poor drainage consider using fungicide seed treatments to protect seedlings.

Varieties equipped with genes resistant to Phytophthora will protect plants after they emerge and later in the season as well. Contact your local Latham® representative to determine which varieties will work best for your needs.