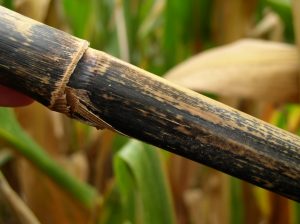 There are a variety of stalk rots that infect corn, causing extensive damage to crops and losses in yield. Common factors make corn susceptible to stalk rot including warm and wet weather, stress after pollination, fertility issues, stalk boring insects, and the presence of other foliar diseases. There are key signs, symptoms and differences that distinguish the different types of stalk rot.

Anthracnose stalk rot is the most common type of stalk rot and is caused by the fungus Colletotrichum graminicola. The fungus is favored by wet, warm weather and overwinters in corn residue. Signs of the disease will be observed four to six weeks following pollination.

Scouting for Signs and Symptoms

The disease undergoes three phases with distinct signs and symptoms:

Stalks will exhibit fragility and appear to be brittle when handled. Different from other forms of stalk rot, anthracnose stalk rot will cause plants to lodge at the upper portion of the stalk. Pinching or bending at the nodes can be used to test for stalk lodging.

Stalk rot can lead to death just before maturity and reduce yield. In addition, plants defoliated from hail damage and those that are nitrogen deficient are at an increased risk for being infected from the stalk rot.

Planting hybrids with resistance to stalk rots is a helpful defense against these diseases.