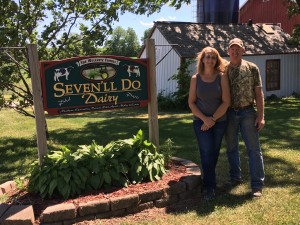 Phil and Patti Wellnitz of Seven’ll Do Dairy in Orfordville, Wisconsin. The barn, silo and pumphouse are the remaining original outbuildings. Over time, a new free stall barn was built for cow comfort and to make room as the herd size increased. A calving barn and machine shed also have been built.

Where there’s a will, there’s a way. Phil Wellnitz has been living that mantra since he was knee-high to a dairy cow.

“One day when I was 10 years old, I was milking with my 16-year-old brother. He was complaining about having to haul milk using the old Surge buckets. I told Dad that I would do it instead,” says Phil, who is one of 11 kids raised on a dairy farm east of Janesville, Wisconsin. “I was so short at that time I had to set the bucket on my knee and then pour it into the strainer, but I was determined. From that day on, I was responsible for hauling milk.”

With a desire to constantly improve efficiencies, at the age 17, Phil bought a fifth milk bucket.

“Dad ran three buckets and I ran two. We carried pails until I graduated and then Dad put in the pipeline,” recalls Phil. “Two weeks after I graduated high school, I needed a way to make some money. I got a job for another dairy farmer. I would milk Dad’s cows early and then head over to milk 80 cows by Sharon. Then I’d do the same thing each evening.”

After working at both dairies for three years, Phil asked his parents if there would be an opportunity for him to take over the family dairy. The answer was no. Instead of getting bitter or angry as some folks might do, Phil channeled his energy into pursuing Plan B. Within two weeks, he was milking on halves with another farmer by Milton.

“I knew I was working toward my goal, but I couldn’t stay there long,” says Phil. “Fortunately, Bob Craves was a field man for Beatrice Foods at that time. One February morning Bob walked into the barn where I was working and said, “You got a couple minutes? I have a farm to show you.”

“I got in Bob’s truck and we drove to this farm, and I couldn’t believe it,” adds Phil. “You’ve never seen such a mess! There was a fence all around the yard because sheep were brought in during the summer to keep the weeds down. Manure was piled everywhere. Two Saint Bernard dogs met us at the door of the house. No one was living here at the time, and those dogs had the run of the place.”

Fueled by hopes and dreams, 22-year-old Phil met in March 1982 with the property owner. Ann Renly graciously offered to let Phil buy the farm on contract, and he soon got to work on getting the farm in working order.

As they often do in rural areas, friends and neighbors pitched in to lighten the workload. Many people showed up to help the young dairyman clean up the farmstead. One of those who lent a helping hand was Patti, who grew up on a hog and tobacco farm two miles down the road.

Phil and Patti were married in November 1983, and they’ve made their home here for the past 34 years. The house, which was built in 1911 by Ann Renly’s grandfather, has been completely remodeled and additions were made to make room for the Wellnitz’s seven children.

“I always said that I was never going to marry a farmer,” said Patti, “but I married a good one. I couldn’t be happier with the place we have to raise my children. Our kids learned early on to work hard and to be team players. Although they had to work hard, they also have a lot of fun. There was often a game of kick ball or softball in the front yard after breakfast.”

Two of the Wellnitz’s sons work full-time on the dairy. Both milk twice daily. James, 20, feed cows and helps Patti with the morning calf chores while Phil, and his 27-year-old son named Phil, milk cows. James and his brother Phil take turns mowing, chopping and raking hay. Their father Phil does all the planting and combining. Patti fills in where needed from milking cows to raking hay and feeding young stock.

“Everyone is involved to some degree with our operation,” says the older Phil. “When our kids come home, the first place they go into the parlor and start helping.”

Their second oldest son, Dan, lives on the second farm Phil bought on contract. Heifers and dry cows are kept there, so Dan takes care of them in addition to owning and operating a construction business.

The Wellnitz’s daughter, Samantha, lives with her husband and their son in Evansville. She works in Madison and visits the farm about once a week, so her one-year-old son gets plenty of time to “farm” in the sandbox and see the cows. She’s expecting her second child in August.

Daughter April, 25, had worked at the daycare at Orfordville and currently nannies for Samantha and Dan’s kids. She also milks nights at least three times per week.

Twenty-three-old Molly is a dental assistant.

The proud parents of seven, Phil and Patti named their dairy “Seven’ll Do.” All of their children enjoy working together as their schedules permit and gathering together as often as possible. When they all come home, you can bet the table will be filled with fabulous foods featuring dairy products. Today Patti shares with us two of her go-to recipes for family get togethers. 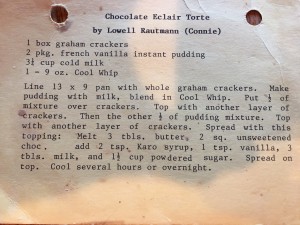