Soaring Through the Good Times 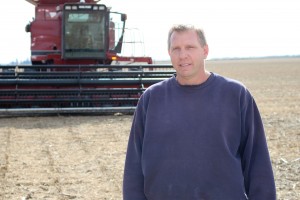 You can take the boy out of the farm, but you can’t take the farm out of the boy. Eighteen years and six states later, Dale Hemann of Osage, Iowa found himself back in the town he grew up in and began farming.

In addition to wanting a lifestyle change from Memphis, Tennessee, Dale and his wife knew the Midwest was an ideal place to raise their family. He and Cindy packed up in 2001 and moved north to Wisconsin. A few moves later they moved to Iowa. In 2005 they moved to the farm on the same acreage where Dale was raised and where Dale’s dad, Larry, farmed until he retired in 1996. Larry continued selling seed until 2014, serving as a Latham® dealer for 31 years.

Dale and Cindy operate the family farm together. Dale manages the day-to-day responsibilities of caring for crops and livestock while Cindy takes care of the farm’s business operations, including finances. She also helps in the field and with livestock whenever needed. In an effort to diversify, they built a cattle barn and started finishing feeder cattle in 2014. Knowing corn prices would not stay high, they decided to incorporate livestock into their operation.

Their Mitchell County farm is 565 miles away from the airport in southern Missouri, where Dale and Cindy met, yet their journey has come full circle. It was his love of airplanes that drew Dale to college and his love for family that brought him back to the farm.

When Dale was younger, he found find himself fascinated by planes that flew over their farm. He wondered where they were headed, what altitude they were flying at and what type of plane was being flown. Now, with the help of the internet, he can answer those same questions by looking up planes on Flight Tracker. This interest took flight in Dale’s life and led him to earn a master’s degree in Aviation. After graduation, he traveled around the world for various job positions, working for American Airlines, Kestrel, and FedEx.

Now Dale is working toward getting his CFI (Certified Flight Instructor) rating, so he can teach his children how to fly. With three children in high school, the Hemann’s know this is a crucial time for their children. Dale and Cindy want to provide them with all the opportunities they can to help them decide how to further their education.

“I want the give them the tools to decide,” says Dale. “I don’t want them to second guess what they could have learned. I also want them to set their own goals because without goals, a person doesn’t get very far.”

Today, Dale and Cindy are sharing a family favorite – their very own pumpkin bars! Find their recipe below.

In a medium bowl, mix the eggs, sugar, oil, and pumpkin with an electric mixer until light and fluffy. Sift together the flour, baking powder, baking soda, cinnamon and salt. Stir into the pumpkin mixture until thoroughly combined.

To make the frosting, cream together the cream cheese and butter. Stir in vanilla. Add confectioners' sugar a little at a time, beating until mixture is smooth.Add milk if needed. Spread evenly on top of the cooled bars. Cut into squares.