John and I were among the 55 seed industry representatives, who gathered last week in Washington, D.C., to “Storm the Hill.” Hosted by the American Seed Trade Association (ASTA), “Storm the Hill” provides a unique opportunity for seed-industry partners from every sector across the nation to join together as a unified voice on Capitol Hill.

Approximately 90 visits were made to U.S. senators and 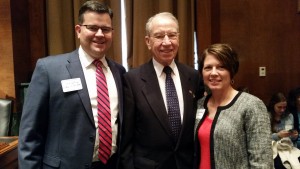 representatives about a number of issues that will impact the future of the seed industry, including the efficient movement of seed across state lines and country borders. We had the pleasure of attending a Spring Break Reception (#IAinDC) where we thanked Senators Grassley and Ernst for supporting a national solution for the labeling of foods made with GMO ingredients. We also visited each Iowa congressman’s office to thank them for supporting this issue, as well as other issues that impact the livelihood of Iowa farmers and small business owners. 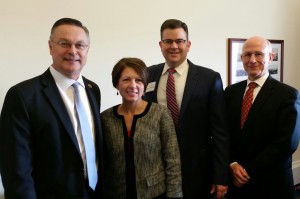 John and Shannon Latham joined seed company representatives from the state – and the nation – last week on Capitol Hill. They met with both Iowa senators and all four representatives including Rod Blum (R–Dubuque), who is pictured here on the left.

Last week’s congressional visits couldn’t have been better timed as they were made the day before the Senate was scheduled to debate the GMO labeling bill. Seed industry representatives called upon elected officials to prevent a costly and confusing patchwork of state labeling laws by passing a uniform, voluntary labeling bill. We encouraged them to vote “yes” for science and “no” for anti-GMO standards.

U.S. Senator Pat Roberts, Chairman of the Senate Committee on Agriculture, Nutrition and Forestry on March 16 released a statement regarding the Senate’s failure to invoke cloture on the Biotechnology Labeling Solutions Bill:

“For more than a year, I have called on my colleagues across the aisle to come to the negotiating table to address the problems facing the nation’s marketplace should states continue to mandate confusing and differing biotechnology labeling standards… “My approach to labeling acknowledges what many American consumers forget: our food is abundant, affordable and safe. We must continue our reliance on science and technology to ensure our continued prosperity.”

The Senate failed to invoke cloture on the bill with a vote of 48-49. However, there is still hope that negotiations will continue after the Easter break. You can bet that we’ll be following this issue, as well as several others that impact the seed industry’s shared commitment to producing better seed for a better quality of life. 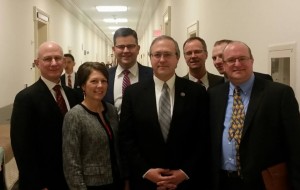 A diverse array of genetic resources are the building blocks of better seed.  Sophisticated breeding programs allow the seed industry to help meet the need for a wide variety of nutritious and high quality products, while supporting sustainable agriculture practices that preserve our environment’s natural resource and biodiversity.  To ensure full access to the plant materials needed for continued innovation, ASTA members last week called on Congress to pass the International Treaty on Plant Genetic Resources for Food and Agriculture and increase funding for the National Plant Germplasm System and Germplasm Enhancement Maize (GEM) Project.

Seed plays an important role in preserving, rehabilitating and reclaiming fragile lands, as well as maintaining habitat for wild species. As chair of ASTA’s Legislative & Legal Affairs Committee, John also advocated for a number of priority issues related to conservation and the environment including: Congressional oversight in the implementation of the National Seed Strategy; the importance of close collaboration between the U.S. Department of Agriculture (USDA), Department of Interior and the seed industry on pollinator strategies; continued investment in USDA Farm Service Agency and Natural Resources Conservation Service (NRCS) Programs; and full funding for the USDA-NRCS Plant Material Centers.